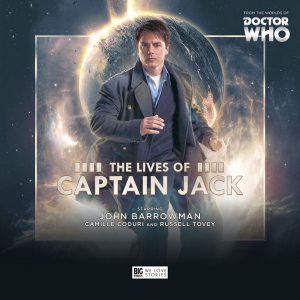 Let me start, not so much with a disclaimer, as with an apology.  I’ve never been much of a fan of Captains with ‘Jack’ as their first name (sorry Sparrow fans), so I started to listen to this latest set of audio tales with the same sort of resignation one might feel on going to the dentist for a root canal. Sorry Mr Barrowman. Torchwood never really ‘did’ it for me. It felt like a bunch of sixth form students had written what they thought was a television series for adults, but without realising that overt shagging and swearing do not an adult programme make. And because of its relationship with you-know-Who, it sort of made me feel embarrassed to be a fan of Doctor Who.

Now, that’s not a very promising opening paragraph. But as someone who is willing to be proved wrong, and has eaten more than their fair share of (their own) hats, I will admit right here and right now that The Lives of Captain Jack does not, in any way shape or form, suck (fnar). And while a series that focuses entirely on one character could be a risky proposal, our erstwhile Captain’s had an interesting life, and this series takes full advantage of that.

So here we have four stand-alone stories taking place at different points in Jack’s life. All of them away from Torchwood, and all linked seamlessly to the mythology established in Doctor Who. And these links work well. The Lives of Captain Jack feels so much closer in tone and feel to Doctor Who than it does to Torchwood (heaves a sigh of relief). Hints of mythology regarding Captain Jack that were established in Who are explored here, more so than they ever were in Torchwood. It’s also distinctly less gritty and, thankfully, less ‘16 year olds writing for adults’ than Torchwood.

So let’s unpack the stories.

The Year After I Died

The series begins one year after the Eccleston swansong, The Parting of the Ways. Earth is still recovering from the last Dalek invasion. Many survivors are desperate and hungry so naturally, there are monsters out there who are all too willing to take advantage of that desperation. The survivors of Earth need a hero, but understandably, Jack reluctant to become one of those ever again…

A grand, post-apocalyptic thriller is a great way to start a series, especially one with close ties to such a major (televised) story. The Earth was devastated in The Parting of the Ways, but we didn’t get to see that on-screen. While technically, we don’t get to “see” it here either, we definitely get to experience it. There is a real atmosphere of desperation and darkness to this story, which, as a Morrissey fan, I really liked.

Jack is a very different man to the one we recognise from Doctor Who and Torchwood. As the story unfolds, we get to see why. It’s clear that the events of The Parting of the Ways had a huge impact on him. It’s going to take something big to push him into becoming the man he once was – and then into someone even better.

Next up, something we all wanted even if we didn’t realise it: a Captain Jack and Jackie Tyler team-up, which, alone, is worth the price of the box set.

Better still, it’s almost entirely a two-hander and full of great dialogue. It’s a wonderful setup, too. The story is able to feature the Powell Estate while only featuring these two characters, and also makes sure to include a good little sci-fi story, to boot.

It’s strange to think how two very different people close to both the Doctor and Rose meet for the first time in this episode. What I enjoyed about it was how it explored their very different viewpoints. Jack’s pretty much used to future tech and dealing with aliens by this point.

In some ways, Jackie also has experience of those things, but she’s still very much a woman of the 21st century. She has never been off the planet Earth, and she’s not planning on changing that any time soon.

It’s also nice to explore their personal lives, too. Jackie is, as ever, worrying about her daughter’s safety. She does get to learn more from Jack at least, while Captain Jack himself is still waiting for the Doctor at this point. He’s been waiting a long time, and we know he’s going to be waiting just a little while longer.

Towards the end of The End of Time, the Tenth Doctor briefly visited his travelling companions before he regenerated. One such visit involved briefly seeing Jack and introducing him to Alonso, one of the survivors from an earlier Christmas special; Voyage of the Damned.

One Enchanted Evening begins directly afterwards and follows Jack and Alonso on what should’ve been a nice, romantic encounter for both of them. Instead, it becomes yet another very bad night.

This is a proper, old-school science-fiction romp of an episode, though as with the other episodes in this set, the plot is really no more than a mechanism from which we can find out more about its main characters. Here, it’s made clear that Jack is in a really bad place right now, but not why that is. And while fans who have seen Torchwood: Children of Earth may get a little something extra from the story, it’s not essential to have watched it to enjoy this story.

Alonso gets some rich character exploration too. It’s been some time since Voyage of the Damned, and he’s been living with a lot of survivor’s guilt, so the fact that One Enchanted Evening has echoes of that particular story is a nice touch.

This episode is probably my favourite of the whole set, though technically it isn’t really a story about Captain Jack Harkness. It takes place before Jack meets the Ninth Doctor, and even before he takes up the alias of Captain Jack Harkness. At this point, he’s still working for the Time Agency, and he (thinks) he’s one of their best agents. But everything changes when he finds out how old he really is…

This story gives us a glimpse of Jack before he met the Doctor. At this point, he’s arrogant, reckless and selfish. He has none of the self-doubt or caution that he will gain in later years, and neither, importantly, does he have any of the heroism or sense of justice we are familiar with. All he’s interested in is having fun and getting paid.

Serving as a reminder to how much Jack has developed as a character, while still presenting a great conspiracy thriller, Month 25 is a real highlight of a great set.

All in all then, this set of stories paints a well-rounded, character-driven picture of one of Doctor Who’s most memorable characters. The stories are all of a very high quality, and John Barrowman gives a consistently solid performance throughout. The Lives of Captain Jack is more than just a tribute to its title character, though. By focusing heavily on characters and storylines from the first four series of modern Who, it’s actually a worthy tribute to the Russell T. Davies era, so if you’re a fan of either the Captain or of Russell, then this box set is pretty much an essential purchase. Bex Ferriday