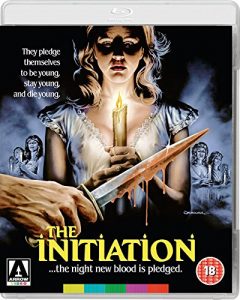 The Initiation can’t seem to decide whether it wants to be a balls-to-the-wall slasher or a psychological drama about suppressed memories and recurring nightmares, and by pitching itself towards both camps, it falls kinda short on either count. The psychological drama side starts from a decent premise, but quickly becomes as dull as ditch water, and you just can’t wait for these annoying characters to start getting axed. Unfortunately when director Larry Stewart does decide to ratchet up the tension (when the girls are being stalked around a shopping mall where they’re spending the night as part of a dumb sorority initiation ritual), it’s a case of too little too late.

The deaths aren’t gory enough to make you sit up and scream (let’s face it, a gardening fork is hardly as terrifying as a chainsaw or a sledgehammer, is it?) and you certainly couldn’t give two shits about any of the victims. There’s the usual pointless nudity to remind you you’re watching a film made in 1984, and a few extra points are clawed back thanks to slightly memorable deaths with bow and arrow and machete, but the twist at the end is so fucking preposterous, you’re definitely left wondering why you invested 97 minutes of your time watching this half-baked plod-a-thon, which even the usually reliable Arrow extras can’t really salvage. Ian Glasper

Kelly Fairchild is a college freshman with a lot on her mind. In between class she’s also dealing with the daunting task of rushing her desired sorority, coping with nightmares from her childhood, and stopping her over protective mother from ruining her life. And that’s before the killings start.

Leading the cast in her first leading role is Daphne Zuniga, who will always be most known to me for her role as Princess Vespa in Spaceballs, but undoubtedly her tenures in Melrose Place and One Tree Hill brought her to the mainstream.

Coming right at the end of 1984, The Initiation appeared at the end of the golden era of American slasher pics and apart from late night cable TV airings, seems sadly forgotten. Simply overshadowed by the seminal A Nightmare on Elm Street, which also dealt with dream based horror, The Initiation nonetheless has enough going for it to deserve being remembered as it attempts to pack as many plot directions into its runtime as possible.

It’s definitely a play-by-play slasher as you can essentially cross off a bingo card of expectations while you watch, but it’s not without it’s charm. One-by-one killings by a mystery perpetrator? Check. Breaking into a shopping mall? Check. Ending that essentially falls apart if you even think about it for more than 10 seconds? Double check. But that’s pretty much the point of these films, is it not?

Arrow have undoubtedly put some effort into this release, which is the first time it has been mastered in high definition, and despite the grain heavy source this is probably the closest it’s looked to its original debut. Complete with the original mono soundtrack, it feels a very authentic and accurate restoration, which has to be commended for smaller titles like this.

The Initiation is definitely worth a watch from fans of the genre who might have missed this one previously. With the usual set of slasher core staples it’s not going to convert those who don’t care for these kind of films, but it’s a worthy addition to those who never got enough of them. James Connors