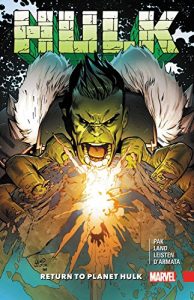 Planet Hulk was a masterclass in four colour storytelling and showed that you could utilise the not-so-jolly green giant who’s been at the forefront of the Marvel Universe for more than half a century in a multitude of different and intriguing ways. It was multi-layered, ambitious fiction that took an unlikely anti-hero and transformed him into mythical, god-like King who was destined to be the architect of his own downfall.  The fact that it was not only adapted as a full-length animated feature, but that major elements of its plot were incorporated into Thor Ragnarok should give you some indication of just how beloved it was and still is. And now, Greg Pak has taken the Hulk back to Sakaar, back to the world that he ruled over and eventually broke, or more accurately he’s propelled Amadeus Cho into realms unknown and into a mess that was wholly created by Cho’s Gammma Ray powered predecessor, and the sometime bane of his existence, Bruce Banner.

Electing to pursue a more straight forward path with Return to Planet Hulk, Pak this time casts his hero into a basic power struggle for control of Sakaar and uses the “Hulk vs Warlord” theme to accentuate the fact that Cho, the super genius who revels in his ability to control and fix everything, is left floundering like a fish out of water while he tries to come to terms with, and understand, the concept that governs Sakaar. That might makes right, strong is good and strongest is best. It’s an environment and planet that could have been purpose built for the Hulk and one in which he should flourish, and would do were it not for the fact that despite the best efforts of the clans he’s trying to save to get him to let loose, he refuses to let the monster take control and let the Hulk be the Hulk.  That is, he does until the arrival of an old “friend” who pushes him to the point where even Amadeus has to admit that sometimes you need a monster to stop a monster and he finally releases the world breaker and in doing so lets the Hulk Return to Planet Hulk.

The two Gregs, Land delivering the magnificently impressive artwork that Pak constructs his narrative around, have crafted a tale that while appearing to be relatively linear on the surface, is actually laid on a foundation of intersecting arcs that strengthen the central theme.  As a twenty first century exploration of the ideas that Stevenson first postulated in The Strange Case of Doctor Jekyll and Mr Hyde, Return to Planet Hulk uses it’s story to explore the duality of human nature, specifically that of its main character, and the struggle that exists between biological imperative, intelligence and learned behaviour. Return to Planet Hulk also questions accepted theories of, and incorporates the reality of what actually happens when, tribal warring societies collide headlong with supposedly “civilised” ones and how the outcome of those encounters is ultimately shaped by the needs and the perspectives of both sides. And there’s a lot of smashing and wonderfully sickening levels of violence and brutality too, which is always nice in a Hulk story. Whoever said that you should never go back and that you can never go home was absolutely wrong.  Hulk… SMASH!  Tim Cundle