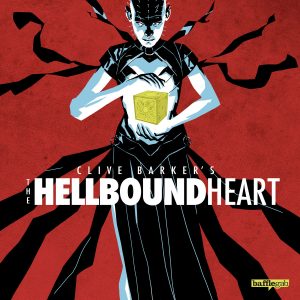 If you’re a Hellraiser fan, chances are you think you know what the Pinhead Cenobite looks and sounds like. He looks and sounds like Doug Bradley, right? Or, if you insist and you’re really up to speed, like Stephan Smith Collins. But mostly, irrevocably, like Doug Bradley, with the white-powdered bald head, and the ghastly symmetrical checkerboard of nails pounded into his face and skull, and the growly ‘We will tear your soul apart’ voice.

Hellraiser fans, be prepared to be knocked on your asses by the new Bafflegab audio version of The Hellbound Heart, the Clive Barker novella that started off the whole long ever-trundling Hellraiser franchise.

This is an audio version that sticks waaaay more to the letter of the novella than even the first Hellraiser movie did, though the action and the characters are broadly the same as in that movie. While the story of Julia Cotton, trapped in a loveless, undersexed, underthrilled marriage to the nicer and duller of two brother remains, Larry from the movie reverts to Rory from the novella here. Likewise Kirsty, who was re-cast as Larry’s daughter in the movie, is here, as in the novella, simply someone who’s a long-term friend of Rory’s, and who fancies her chances of being with him. That makes for a more legitimately tense dynamic, and also stops Rory seeming so irredeemably pathetic as he did in the movie, by proving that while Julia may want the harder, more macho love of his disreputable brother Frank, someone fancies the relatively feckless Rory. That’s the set-up here then – unspoken, hidden relation drama boiling away to eventual multiple murder.

But oh yes, then there’s ‘Pinhead’.

Now, while some horror fans’ heads explode, with the words ‘It’s political correctness gone maaaad!’ on their lips, it’s worth going back just briefly to the novella itself. Here’s how it describes the Pinhead Cenobite:

Its voice, unlike that of its companion, was light and breathy – the voice of an excited girl. Every inch of its head had been tattooed with an intricate grid, and at every intersection of horizontal and vertical axes a jewelled pin driven through to the bone.

Yes, that’s right, horror-fans – Pinhead was always meant to be female and breathy, and her pins anointed with jewels. Suck it up, folks – everything you think you know is wrong.

Everything about the Bafflegab version though is gloriously right. Casting Tom Meeten as both Frank and Rory Cotton allows for a vocal similarity that’s believable, but the characters work as two sides of the same genetic coin, Metten making his Rory voice all lightness, concern and new man, and his Frank a growling, rasping, whisky-soaked come-hither of primal power and muscle and violence. You can practically smell the testosterone dripping off Frank Cotton’s voice, whereas from Rory, you get the faint, uninspiring whiff of niceness and a lived-with, under-sexed  frustration.

Neve McIntosh brings new levels of weary despair to Julia in this audio version too – a character who drifted towards Rory for the daylight safety and concern and veneration of his arms, but who found a vicious thorn of sexual thrill with his brother Frank, and who, from then on, was tormented by that sexually-driven love for the other brother. Julia’s is very much a story of obsession with the love she feels over the marriage in which she’s trapped – it’s a masochistic love that drives her to do what Frank says, to get what Frank needs, and which therefore drives her in the story of The Hellbound Heart to procure lovers in a local bar, who are sacrificed to Frank’s need for flesh as he claws his way back to life, having tangled with the hellish immortal sadomasochists known as the Cenobites. While Claire Higgins in the movie has a touch of Lady Macbeth about her, McIntosh’s version reveals more of the desperation to feel, to love, to be part of something with a man who brings her sensuality to life. McIntosh brings a pathos to the part that really drives Julia on in a way that makes dramatic sense to the listener, and even allows us to sympathise with her.

Alice Lowe’s Kirsty feel more alive and pro-active in this version too, more driven by her love of Rory than Ashley Lawrence’s movie version. Part of that is the shift back to Kirsty’s position of being a woman who loves Rory, rather than being his daughter – the lines of loyalty and action are much clearer when she’s fighting for him as a potential partner than they are when she’s fighting for him as a father. But Lowe gives Kirsty something believably 21st century too, a sense of not quite being able to give up on the man she wants, which allows us to at least briefly wonder if it isn’t in fact Kirsty who’s on the wrong side of the ethical divide in this dynamic, interfering in a married couple’s relationship.

Buuuuut then there’s Frank, and there’s the Cenobites, so that ship has well and truly sailed before Kirsty starts poking her nose in.

Ahhh yes, the Cenobites. Clive Barker’s most indelible signature-stamp on the popular culture of horror. Barker’s written lots and lots of really innovative fiction, but he will forever be tied up (ahem) with the Cenobites, and the Lemarchand box, which, when arranged in its Lament Configuration calls these priests of Hell, these ministers of the Order of the Gash. They’re a hypnotic concept and in themselves they hint at a wider universe locked away in Barker’s imagination, ready to be explored in due course. Having said that Evie Dawnay plays the Pinhead Cenobite, it’s fair to say that unless you’re absolutely unable to get Doug Bradley ‘s series-propelling portrayal out of your head, she’s an utterly gorgeous choice of voice to do the character justice, slightly androgynous in her distance from human concerns, as the Cenobites are all supposed to be, but with a breathy female tinge that hints of egoistic little girls squashing ants between their fingers, of a Borg Queen of pleasure and pain. Dawnay is hypnotic in this role, and she’s ably assisted by her junior Cenobites, Chris Pavlo, Scott Brookman and Nicholas Vince, making for a new-old iteration of the Cenobites that captures the imagination, and run away to Hell with it.

Dawnay also takes a gloriously perverse secondary role in the drama as Amy, Kirsty’s friend who’s perpetually urging her to quit her obsession with Rory, but in the normality and the everydayness of her Amy voice, you’d have to have the cast list in front of you to tell that Dawnay’s doing double-duty. As with Meeten playing both Cotton brothers, there’s a joyful internal symmetry in having Dawnay deliver both the voice steering Kirsty away from the Cottons, and the voice that demands she pay for their sins.

Lisa Bowerman, known among other things for many audio roles at Big Finish, is never anything less than a story-helper, though here, her dual role as both the Cottons’ neighbour, Susan, and the nurse who tends to Kirsty in her post-horror hospitalisation, leads to the faintest touch of confusion, and for a moment, we believe Susan has found Kirsty on the street outside the Cottons’ house and gone to hospital with her in the absence of anyone else who cares.

That’s the tiniest of nits to pick in a compelling new audio version of The Hellbound Heart, though – at just an hour and a quarter, the pace is punchy, the scares are delivered at their full weight, and the elevated performances from Tom Meeten, Neve McIntosh, Alice Lowe and Evie Dawnay make for a Hellbound Heart that’s true to the original, while feeling new and bright and sticky for an audience perhaps grown slightly complacent on the Cenobites’ continual returns to the screen. Clive Barker’s original vision shines through here in a stellar adaptation by Paul Kane, and really helps Bafflegab’s diversion into straight-up horror audio feel like a label that’s come home, settled into the niche that was always waiting for it, and has the potential now to power on to even better things in the future.

Get over the fact of a female Pinhead, horror-fans. Bafflegab’s got your Hellbound Hearts well and truly covered.  Tony Fyler