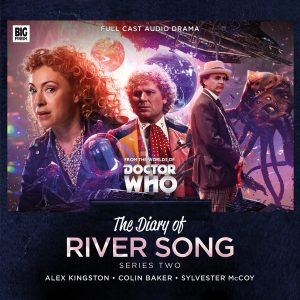 When all hope seems lost when things are at their absolute worst, the end is nigh and the chances of surviving, let alone beating, whatever the oncoming cataclysm is are impossible at best, that’s when River Song steps into the breach and, inevitably saves the day. After all, a woman’s work is never done and you should never, under any circumstances, send a man to do a woman’s job. Unless of course, that man is The Doctor who can’t help “interfering” in whatever is happening and making things ten times worse (which, as a consequence, always makes River’s job ten times harder than it needs to be) and why she almost always needs a little “help” from, or need to be “rescued” by, her husband.  It’s a complicated dynamic, but then most relationships are, especially if your other half doesn’t actually know he’s your other half, which, again, is almost always the case when River Song and the Doctor’s paths cross.

This time though, River has two Doctors -neither of whom knows her- to lend her a helping hand and contend with; which is just as well, as in the four separate, but intertwined, stories (The Unknown, Five Twenty-Nine, World Enough and Time and The Eye of the Storm) of marital “disharmony” and cosmic chaos that comprise The Diary of River Song: Series Two she’s going to need all the assistance that she can get. From space bound missions to impossible planets in which none of the crew can remember why they’re there, to trying to save a family from the destruction of their world, to fighting corporations and their plans to maximise galactic reality and battling multi-dimensional entities both in the far future and in the not so distant past, River’s second series is a rollercoaster ride through all kinds of crazy chronal escapades and alternate possibilities. One in which potential futures collide and the energy created by the millions of different paths taken by every living creature are hungrily devoured on the road to annihilation, and the only people standing in the way of the end of the world are River Song and her partners in life, crime and all stops in between: Doctor numbers Six and Seven.

Catapulted into the thick of the action from the get go, Alex Kingston is magnificent as River, a character who is all things (friend, companion, hero and saviour) to everyone caught up in the rapidly unfolding apocalyptic whirlwind. Fashioned around the idea that the biggest events have the smallest of beginnings and that destiny has plans for even the most seemingly innocuous of individuals, The Diary of River Song Series Two is snappy, fast moving and clever, full of deliciously detailed characterisation, finely honed dialogue and incredibly emotional, and all too often heart-breaking, intensity.  But its finest moments lie in the phenomenal chemistry  that exists between the central character and her “husbands”,  and the ways in which these fractured, difficult relationships are brought into being and given life by the writers and cast alike.  And it is absolutely, as another of River’s husbands is so fond of saying, fantastic…  Tim Cundle