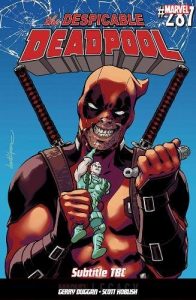 That’s right folks, Wade is done with helping old ladies across the road*, minding his P’s and Q’s, smiling for the camera while saving the world and the whole whiter than white hero shtick. He’s done with being Mr Nice Guy and he’s cashed in all of his Avengers goodwill and bought himself a great big treat bag of thoroughly horrible and completely despicable to chow down on. To be absolutely fair** to Deadpool though, it isn’t exactly his fault that he’s turned to the dark side, as after throwing his lot in with Steve Rogers during the whole Secret Empire debacle and letting one of his many nemeses get too close to the people he loved most in the world, he was easy pickings for anyone with a twisted plan who needed a gun for hire to carry it out.

Which is exactly what happens when Stryfe, a Cable clone from some future or other (there’s so many of them, possible futures that is, that it makes your head hurt if you think about it too hard or too much), finds him and promises to save his “family” in exchange for Wade killing four people. Or as he more succinctly puts it, a life for a life.  Much as his conscience tells him it’s a bad deal, it’s the kind of bargain that Wade can get behind, so he signs on the dotted line and takes the contract.  And the first name on that list? Why, it’s none other than everybody’s favourite time travelling son of an X-Man, Cable.

But, as Wade knows from their long and storied history, Cable isn’t going to go down without a fight and he’s definitely not going to be easy to murder. Which is why the resulting to-and-fro, blow for a blow, arm for an arm, bullets flying and swords swinging action extravaganza that trades clips and quips and kills and thrills in fast and frantic fashion, is a five issue mini-series. Hunted relentlessly by Wade, harried by time cops and trying to come up with a way to avoid being made dead by the Merc with a Mouth that lets both of them off the hook tests Cable in ways that he hasn’t been tested in years and takes him and his would be assassin from one end of time to the other as he tries to come up with the kind of plan that would make Hannibal Smith smile, utter his over-used catchphrase and fire up a cigar.

I know I’ve said it before and I’m almost sure that I’m going to say it again, but whatever pills, potions, powders and brand of coffee Gerry Duggan is consuming at the moment, I want all of them as he’s firing on all cylinders and charging way ahead of the pack. In fact, he’s so far ahead of the pack, he’s going to need buy a pair of binoculars just so that can see them when he glances over his shoulder.  And I’ll bet that he’s shared his stash with Scott Koblish because he’s drawn up a storm in Deadpool Kills Cable and filled every page with the kind of artwork that would make Michelangelo cry and throw in the towel. If you’re not down with Duggan, Koblish and Wilson, then you’re a schmuck. It’s that simple. Deadpool rules… Tim Cundle

*Nobody said that they had to be one piece or breathing when they reached the other side.

**Somebody has to be