The latest addition to the fold of glam punk sensations The DeRellas, Mr. Joe Maddox (AKA Joey DeRella), kindly took some time out from adjusting his polka dot neckerchief to speak to Ginge Knievil at Mass Movement. Enjoy!

MM: So, Joe. You’ve stepped up to the mic stand with your six string to join The DeRellas. How’d this all come about and how’s it been thus far?

JM: Well, I was in another band, The Breakdowns, for the best part of 12 years and we called it a day last June. It was a tough call and it really bummed me out. About three weeks after we announced our “retirement,” I got a message from Timmy [DeRellas bassist] on Facebook asking if I wanted to audition with The DeRellas. I didn’t even know they were looking for a singer. He followed the message up with a call and we chatted a bit, and after considering his offer I said no! It was too soon and to be honest I felt like I’d just split up with long-term partner and wasn’t ready to jump into it with another band. I told Timmy that I’d talk to him in a month. I was pretty low about not being in a band and my girlfriend just told me to go and audition and see how I felt afterwards, so I got back in touch with Tim and did just that and four weeks later I was playing my first DeRellas show in Belgium! Since then, I’m played 11 shows including spots with the Supersuckers and recorded a 3-track single with Pat Collier producing. It’s been busy and quite enjoyable. The guys have really looked after me in a “big brother” kind of way and I’d like to think I’ve had a positive impact on the band. They seem happy with me and like what I do and how I do it. I hope so anyway!

MM: Like many others, I was saddened to hear of The Breakdowns splitting up. Your blend of punky power pop was ace. Are there any beans to spill or is it case of letting sleeping dogs lie?

JM: We were together for 11 and a half years, but Matt, Adam and I had been playing together for 14 years. 2016 was really busy for The Breakdowns and we played close to 60 shows and were the best we ever were; really on fire, but I think we were all burning out. Travelling all over the place and playing so many shows with what seemed like little reward was getting hard and we all had points where we didn’t want to go out and play I reckon. At the end of 2016 we got offered a short tour of Belgium and Holland, and Adam [Breakdowns’ bass player] couldn’t, or didn’t, want to do it so we asked Austin from The Hip Priests to step in… and he was ace! We had a great time staying in some fucking creepy little Belgian village for a week but I felt that it was coming to an end. Soon enough, Adam decided he was out. Fittingly, our last show was the only time we ever played our Christmas single, Christmas Time Alone. It was the last song we ever played. I really miss The Breakdowns and have been blessed to have played with such a talented bunch of guys. I do think there’s unfinished business there and I’d be really bummed if I never did anything with any of them again. I do think no-one was doing what we were doing. We had a good run and put out some very well received albums and played abroad quite a bit. I’m glad of that.

MM: You’ve just committed your first work with The DeRellas to tape. You wanna tell Mass Movement about the upcoming single?

JM: Yeah, it’s called High Rise Supersize and was produced by Pat Collier at Perry Vale Studios.  It’s out April 6th, I think, and is available on 7” vinyl, CD and download. We’re shooting a video next week, which is exciting! I think it’s a bit of a departure for The DeRellas in as much as it’s less glam and new-wave/early Manics. I had an input in writing the lyrics with Timmy and I’m pretty happy with them. One of the B-sides includes a cover of The Sweet’s Fox On The Run, which was a lot of fun to sing, I can tell ya! We’ve got loads of dates all over the UK starting in April and a few shots over in France and Germany too.

MM: You love a Les Paul Junior… and you wear it well! In your opinion, what makes these guitars so special and favoured by punk rockers?

JM: Simplicity, isn’t it? You can’t go wrong with a single P-90 as it’s got a lot of grunt. I play mine through a Fender Hot Rod and for me it’s just the perfect sound for punk rock guitar. Plus all the greats play them – Ian Hunter mainly.

MM: I know you’re a massive Mott The Hoople fan and I hear there’s a family connection. Go on, spin us a yarn!

JM: They were my late Dad’s favourite band. He followed them all over the place. My uncle was mates with Overend Watts too. It seems that back in the day, they were a real lads’ band and they hung out with their fans somewhat. When Mott reformed to play the Hammersmith Apollo in 2009 I bought tickets for my Mum and Dad but sadly my Dad died a couple of days before the first reunion show. I gave the tickets away as I didn’t want to go without them and contacted Ian Hunter. He was so cool and he sent me loads of stuff from the gig – live photos, tour t-shirt, CD recording of the show and signed it all “For Alan,” which I think would have brought a smile to my Dad’s face.

MM: Top 5’s are an impossible task for music fans, but off the top of your head who are the five greatest power pop bands. You got 30 seconds! [laughs]

JM: Easy… Cheap Trick, Tom Petty and the Heartbreakers, Ramones, Redd Kross and The Breakdowns. I’m allowed to say The Breakdowns, aren’t I?!

MM: We’ve both gushed over cult Welsh wrestler “Exotic” Adrian Street online. Are you a wrestling fan or is this just a fascination of an extraordinary rags-to-riches story?

JM: I am a huge wrestling fan and I’m not ashamed to say it! Mostly 70s and 80s stuff. You should see our house, it’s full of signed photos of wrestling greats such as Nick Bockwinkel, Harley Race and Gorgeous George as well as  dodgy pics of Mexican masked men, but for me, Adrian Street is THE MAN. Have you read any of his autobiographies? He’s written seven! And it really is a true rags to riches story. Adrian Street wonderfully believes his own hype too and if you ask him he’d be happy to tell you that he influenced both Bowie and Bolan, cheated death on more than one occasion, destroyed Macho Man Randy Savage (he did, I’ve seen the matches), and was the first wrestler to sing his own theme tune. He’s recently moved back to Wales, did you know that? He turns 80 next year and he could probably stick kick your head in!

MM: I spy a massive Elvis tattoo on your arm. How much has The King influenced you and does he rank as the ultimate musical icon in your opinion?

JM: There’s no-one like Elvis Presley. I actually have two Elvis tattoos as well as “rock” and “roll” tattooed on my wrists ans a homage to The King. Everything he recorded in the 50s is golden and he just has that iconic look. I’m also a big Little Richard, Chuck Berry and Jerry Lee fan too. What an era, eh?  When I was 18, I had an Elvis Presley credit card which I quite foolishly ran up a lot of debts on, all in the name of Elvis. A fool such as I one might say. 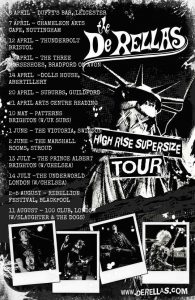 MM: So, aside from the single, what’s next on the cards for The DeRellas? Any upcoming shows that are getting your juices flowing?

JM: Well, we’re playing Rebellion Festival this year on the Sunday with PiL, Michael Monroe, Slaughter & the Dogs ‘n’ all. We’ve got some cool support slots with Chelsea, UK Subs and Slaughter, plus we’re off to France and Germany. It’s always great to get out of the UK and play. In all honesty though, the most exciting shows for me are the ones which take you to the strange corners of the UK. So, I’m looking forward to playing in Stroud because, as a Gloucester boy, that’s the closest I will have played to my hometown since I was in my teens. We’re also off to the Dolls House in Abertillery which I’ve played some wild shows at in the past.

MM: Thanks for you chatting, Joe. I like to leave the bands with the final word so… GO!

JM: My pleasure. Please check out our new single High Rise Supersize out on April 6th and catch us on tour from April through to August. Oh and if you wanna stop by and talk about ‘Exotic’ Adrian Street, please do!

Check out The DeRellas here