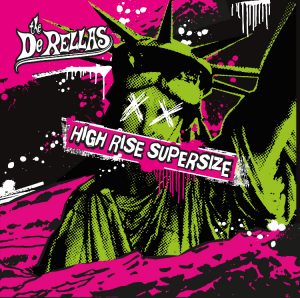 Those purveyors of downright dirty glam punk and rock ‘n’ roll are back with the High Rise Supersize single. This is the first release to feature new frontman and Les Paul Junior slinger Joey DeRella. So, any first time jitters or a lack of what we’ve come to expect from the boys in the leopard print and brothel creepers?

High Rise Supersize slips ever so slightly away from the familiar wham bam and focuses more on the punkier side of the tracks. With a razor blade riff over prolonged power chords, the softer vocal stylings of new boy Joey adds a new dimension. You could say that he’s brought a bit of that power pop with him from his previous guise in The Breakdowns. All the elements of urgent, raw and in-your-face attitude are on show and it already sounds like a live favourite.

B-side Got Something to Say doffs a cap even further into the late 70s’ punk rock waters. It’s harder, angrier and the guitars jut like a lost Ruts classic. Politicians, control freaks and nonbelievers all get it in the neck. The DeRellas haven’t forgotten their glitter though as a cheeky cover of Fox on the Run by the Sweet ends the three track affair.

You can never write The DeRellas off. They’ve been a frontman down more than once, yet Timmy and the boys bounce back from the wreckage and deliver something just as hot. Get down and get with it, kids. Ginge Knievil

Check out The DeRellas here