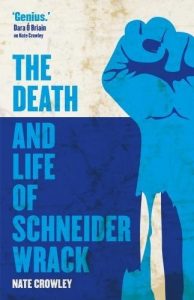 With an introduction quoting from both Samuel Taylor Coleridge and Eric Morecambe, it’s quite apparent that The Death and Life of Schneider Wrack is going to be a sea shanty of black humour.

It’s not giving much away to state that the eponymous Schneider is already dead – and indeed a zombie at the opening of the story.  Whilst there’s a certain amount of adherence to the twenty-first century trend of soliciting sympathy for the living dead, what distances this scenario most from the George A. Romero model is the fact that Mr. Wrack is conscious. He knows damn well he’s a zombie and is understandably miffed.

His subsequent awakening to the horror of his surroundings and determination to get out of this (not) living Hell, set him off on a heroic, gore-filled journey. The mythical locations of Ocean and Grand Amazon are grim, forbidding and unforgiving; plausibly described in great detail by a writer in possession of a frighteningly vast imagination. Wrack’s zombie recruitment drive is fraught with stomach-churning setbacks as he tries to overthrow their violent human manipulators; thwarted periodically by sea-monsters, cyber-sharks and the vilest of living persons. In a complete reversal of the zombie archetype – the undead in this tale are the good guys.

The book’s monumental imagery makes it feel like an epic sci-fi/horror graphic novel without the pictures; relentlessly bombarding you with its nightmare vision of death upon death… upon death. The body-count in this story is MASSIVE. On the down side, this constant barrage of chaos – punctuated only occasionally by dreams, memories and flashbacks of ‘real life’ – starts to feel exhausting and even a little laboured at times (at over four hundred pages). It’s not an easy trick to get a reader to care about characters who are already dead. It’s fairly obvious that they’re not coming back to life anytime soon and your sympathy can decay alongside the protagonists’ flesh if you’re not investing emotionally in who they once were.

Having said that, the dark humour carries it for the most part and you should be suitably amused by Wrack’s mid-point transformation, but ultimately I’m left with the nagging feeling that Mr. Crowley is potentially a far greater writer than is demonstrated in this zombie gore-fest, however inventive it may be. Tim Walker