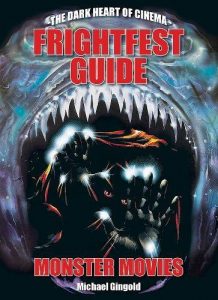 While I don’t exactly fit the criteria to be a ‘Monster Kid’ (I didn’t grow up in the sixties and didn’t spend countless evenings making Aurora and Polar Lights model kits while watching the rubber suited villains of B-movies transmitted via shows dedicated to their horrific existence)  the populist catch-all phrase for Monster movie fanatics who eat, life, breathe and sleep all manner of multi-tentacled monstrosities and creatures of legend, myth, folklore, fantasy and horror, the beasts of the celluloid and video dimensions and their escapades will always hold a special place in my heart.  And that is in no small part thanks to the cinematic efforts of Ray Harryhausen, Rob Bottin, Tom Savini and Rick Baker, who’s special and stop motion effects  captured my imagination as a child and have held it in thrall ever since.

So, I guess while I’m not exactly a member of the ‘Monster Kid’ gang, I have spent a fair amount of my life hanging around it’s fringes and more occasionally  popping my head around its enticing clubhouse door to catch a glimpse of what was, and is, going on in it’s strange world.  And so when the “leader” (okay, so he isn’t any sort of de facto official believe me, if they did hold elections, this guy would win in a landslide victory) of this secretive club, Michael Gingold’s book Monster Movies arrived for review, I didn’t hesitate and didn’t think twice, I just abandoned everything else I was doing, dived straight into its pages and didn’t emerge until, six hours later and with massive excrement eating grin plastered all over my face, I’d absorbed every word and detail and devoured every image and film poster contained in its pages.

Gingold’s knowledge of, and enthusiasm for, his subject matter is utterly infectious and while he presents a multitude of interesting and informative facts on this journey through, and history of, monster movies, his passion for big screen behemoths, drive in dragons and b-movie beasts is almost overwhelming. Stylistically fluid and easy to follow, Monster Movies is, in this scribes humble opinion, the definitive guide to the subject matter as Gingold explains exactly what it is that makes a Monster movie a well, Monster movie and the various sub genre’s and the tropes and stereotypes that are often associated with it before plunging into a mind boggling list of the two hundred films that epitomise the genre.  Never daunting and always intriguing, it’s the kind of book that even the most monster shy newbie will find herself or himself fascinated by, and if you’re a long standing member  monster fan club, will inspire a fervent desire in your heart to watch every film* mentioned by the author. Here be monsters… Tim Cundle

*By my reckoning, I’m ninety seven down, so only another one hundred and three to go. I can do this. Oh yes, I most certainly can…