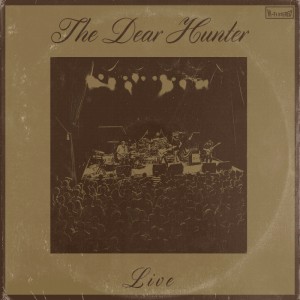 The Dear Hunter – featuring multi-instrumentalist, vocalist and songwriter Casey Crescenzo – has released The Dear Hunter Live. The new album was recorded while the band was touring with accompaniment from a live string quartet and offers a truly spectacular sonic experience that showcases the band’s brilliant performance capabilities. Hear it now via Consequence of Sound.

Along with the surprise release of the album, which is out now on all digital retailers and available for physical pre-order via the band’s Official MerchNOW Store, The Dear Hunter has announced a full US tour with support from Equal Vision Records’ labelmates Northern Faces. All upcoming tour dates can be found below.

On the upcoming tour, The Dear Hunter will exclusively be performing songs from the band’s early releases: Act II and Act III – in celebration of the band’s exciting new announcement that their forthcoming full-length album will be the long awaited continuation of the band’s six album concept series chronicling the story of a boy at the turn of the century, only referred to as “The Dear Hunter”. Acts I – III were released between 2006 – 2009, before Crescenzo temporarily stepped away from the series to work on the critically acclaimed 2.5 hour, 9 EP, 36-track collection: The Color Spectrum, his latest full-length Migrant, and his own personal symphony Amour & Attrition.

The Dear Hunter will release Act IV: Rebirth in Reprise later this year on Cave & Canary Goods, Crescenzo’s imprint label within Equal Vision Records. A full statement from the frontman can be found on the band’s website.