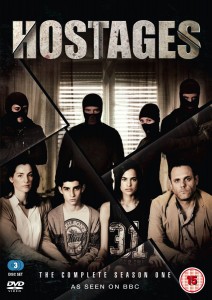 Hostages – The Complete Season One (Arrow)
Trying to keep up with every ‘must watch’ show on television at the moment is just impossible for anyone who isn’t entirely devoted, twenty four hours a day, seven days a week to worshipping the cathode ray. It’s inevitable that some breath-taking series’ are going to slip through your personal net and pass you by, simply because there aren’t enough hours in the day or time in the world to watch everything that we’d like to. So, thank whatever deity owns you allegiance for DVD, because if it hadn’t been for the shiny, magic (hey, they’re the stuff of witchcraft and sorcery to, and for, anyone who grew up believing video was, is and always will be cutting edge technology) disc s I’d never have had the chance to see, and fall prey to its myriad of plots, sub plots and interwoven personal drama, tragedy, redemption and nail biting tension, ‘Hostages’ and that boys and girls would not, as the old saying goes, have been ‘cricket’, as it’s one of the most absorbing, intriguing and addictive shows that I’ve had the pleasure of being overwhelmed by.

Let’s get something straight right from the start, ‘Hostages’, this series, is the original Israeli series on which the US series was based. It’s equal parts psychological, political and personal thriller; the story of a female surgeon, Yael Damon, who’s family are held prisoner in an attempt to force her to botch an operation letting the Israeli Prime Minister die during what should be a routine procedure. So far, so good, as it immediately creates an air of uneasy tension as Yael has to weigh her personal life against her professional, and struggles to face the choices she is being forced to make; but that’s just the tip of the iceberg. As the series progresses, the audience gradually gets to know each of the characters involved and what at first seemed to be clear cut and straightforward becomes ever murkier as motives and the truth are gradually exposed, and the pace and plot slowly begin to accelerate before hurtling toward an unexpected and thoroughly satisfying finale, in a series in which no-one is who they first seem to be, and nothing is as simple as it appears. In fact, if I’m honest, the only thing that bothered me was that it could easily have been eight episodes instead of ten, but that’s just a minor, personal quibble and one that you definitely shouldn’t let distract you from watching this incredible series. My name’s Tim and I am a ‘Hostages’ addict… Tim Mass Movement