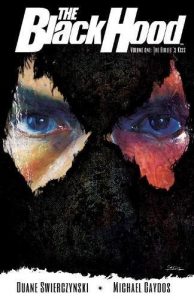 Given the amount of hyperbole – acclaimed writer, superstar artist – and mutual back-slapping that adorns the cover and litters both introduction and afterword of The Black Hood – The Bullet’s Kiss, you find yourself expecting something pretty damn special in this six-issue graphic novel collection of the titular character’s adventures from Dark Circle comics. Indeed, “Noir-Fiction Fans Will Surely Dig This First Sordid Arc,” extols the pull-quote from The Miami Herald, whose writer appears to have a tenuous grasp on today’s ‘hip’ review buzz-words, possibly from dabbling in recreational substances inspired by the profligate pill-popping  of the hooded anti-hero within.

For Highway Patrolman Gregory Hettinger does indeed pop pills. A lot. Admittedly, they’re pain-killers, at first legally obtained and then less so, after half his face is turned into hamburger during a bust gone wrong. He fares less badly than The Black Hood himself during this encounter, which is just as well or Greg wouldn’t have a black hood to pull over his disfigured and now immediately identifiable visage. This is a very convenient death of a predecessor without whom Greg might have had to resort to other means to disguise himself, and become … oh, I dunno, the Carrier Bag.

Yeah, this is one of those stories – an ‘inheriting the mantle’ origin that sees Greg develop – or should the word be ‘devolve’ – from fucked-up cop to ass-kicking vigilante feared by some. I say ‘some’ because during Greg’s initial crime-fighting exploits – so ‘high’ he fights as if within a dream – his disruption of a gloomily-sketched Philadelphia – herein Killadelphia – drugs trade attracts the attention of the city’s kingpin, who in what are probably the comic’s only original and worthwhile sequences is ‘seen’ only ‘behind camera’, from where he masterminds Greg’s demise. Thereafter, knowing he is targeted, Greg’s mantra to the dealers he takes down becomes, “Who’s above you?”

It’s a wholly predictable pay-off, when it comes, to a tale filled with ridiculous ‘Smallville’ flashbacks and cyphers whose only exception is Greg’s speech therapist, Jessie Dupree. But not even she can lift the intentionally depressing goings-on above the unintentionally depressing  familiarity of same proceedings. I’ve lamented before the fact that many of today’s creators seem to have a blind spot as regards anything that was published before they were born, and consequently anyone over the age of ‘old’ will find nothing new here. Writer Duane Swierczynski (Iron Fist) and artist Michael Gaydos (Jessica Jones) are responsible for the first five issues before Howard Chaykin takes over the art chores in issue 6. It’s a quite startling – and, it has to be said, quite welcome – transition in style but one which unfortunately even the presence of a seasoned pro fails to stop this particular ‘noir’ from being flavourless and undercooked rather than hard-boiled. Mike Wild