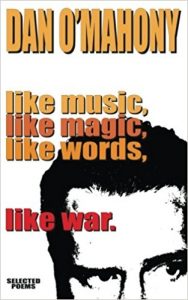 The third installment in California hardcore journeyman Dan O’Mahony’s chronicle of life and experiences, this time reflecting on the demise of his marriage, the death of his mother, middle age, lost love and life on the skids. It’s a frank, revealing and occasionally uncomfortable exploration of the Irish temper, family, poverty, ambition and appetites.

Whilst I’ve always respected the continued volume and quality of Dan’s roadwork within the hardcore punk sphere, it is his literary output that cemented his position in the canon of my own patron saints. I’ve always found a lot of personal resonance with O’Mahoney’s writing. I feel that we share a similar trajectory and troubled history albeit eleven years and a continent apart. We both got them Gaelic roots, blue collar boys with a penchant for romanticizing the pugnacious, hop scotching along the curb between the breadline and success. Masters at snatching defeat from the jaws of victory. Once and former straight edge chancers. Hunger and drive, the common coin.

This volume, much like the two that precede it (Four Letter World and Three Legged Race) is a raw, confrontational and bareknuckle confessional. No punches are pulled, truths and regrets are swallowed down sugar coated. It’s not the brutal hatefuck of Rollins early writing. Mahony’s lament is a far more erudite and melancholy brand of self-loathing. He admits plenty, perhaps too much for the casual tourist, but it’s that raw unapologetic honesty that captivates and keeps this reader engaged. Before I knew it, I’d hit the last page and found myself flipping back to the beginning, pen in hand. Highlighting. Cannibalizing. Repurposing.

Mahony’s many tiered persona rises from the pages like a hardcore version of Mr Ben emerging from the magic costume shop. He’s the  bar keep philosopher with a broken heart. The articulate drill sergeant frontman, wielding that righteous indignation like a billyclub. The punk rock raconteur, regaling the reader with anecdotes like Dean Martin in a black t shirt and a pair of Vans. And on and on….

My sole complaint is that Like Magic.. is simply too slender a volume to satisfy the appetites of this reader. I already devoured it twice in the week since I received it as a gift from a friend. So it’s a massive YES MATE from me, just don’t make us wait another eighteen years for the next volume, asshole. Nathan Bean