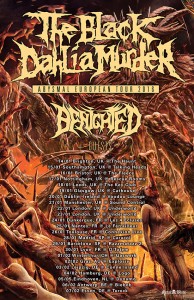 Just one more day until the release of the latest album of THE BLACK DAHLIA MURDER, “Abysmal”!

To celebrate the release THE BLACK DAHLIA MURDER have just announced their next European tour and their first one in support of the new album. The ‘Abysmal European Tour 2016’ will lead the band to the UK, Ireland, France, Spain, Switzerland, Austria, Germany, the Netherlands and Belgium. Support comes from French grind masters BENIGHTED!

Comments the band: “We are truly excited to finally announce our upcoming full scale tour of Europe and the UK with our French homies in Benighted. I think the two of us are an unstoppable duo and that we’re gonna take the whole continent prisoner. Check out the dates and get ready to bang your head off!”

You can stream “Abysmal” in it’s entirety now via metalblade.com/tbdm. The album’s pre-order bundle packages are available at the same spot! “Abysmal” is available in Europe as a Digipak-CD with a bonus-cd featuring three exclusive, brand new tracks! “Abysmal” is also available on vinyl in different colors!

“Abysmal”, is a vicious slab of unrelenting aggression showcases TBDM at their very finest with a meticulous, pin-point precise rhythmic assault mixed with ferocious speed and dynamic hooks. The band also re-enlisted the services of renowned producer Mark Lewis (Cannibal Corpse, Whitechapel) and former bass player Ryan Williams, who also produced Everblack, with the sole intent to get away from the overt sonic sterility affecting far too many contemporary metal albums.