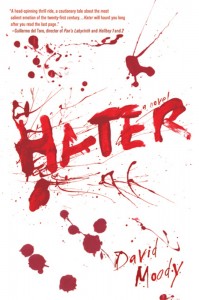 Hook Pictures producer Ed Barratt and David Moody announce a deal to bring Moody’s classic novel of violence and paranoia – HATER – to the screen.
David Moody independently released HATER onto an unsuspecting world in 2006, and within a couple of short months the movie rights had been snapped up by Hollywood. The production was fast-tracked and attracted some big names. Then, as is frequently the way, the project stalled.
Moody and his fans were left in limbo.
The novel went on to be republished by St Martins Press in the US, Gollancz in the UK, Goldmann in Germany and by numerous other publishers around the world. Two well-received sequels – DOG BLOOD and THEM OR US – followed.

But still no movie.

Enter Ed Barratt and Hook Pictures. Ed said “From the first page of the series I could see the potential for Hater to be adapted into a defining piece of British cinema; that I’m now working with David towards that end is almost as big a thrill as the books themselves.”.

Ed and David are thrilled to announce that the development of the HATER movie is now underway from a script by Moody.
“I’m delighted to be working with Ed on this project,” said Moody. “The buzz of having Hollywood interest in my work never really wore off, despite the film not reaching the screen, but there was always a part of me that regretted selling such a small-scale, gritty and uniquely British story to a huge production company. I met with Ed and was immediately impressed by his enthusiasm for the books, and it quickly became apparent that we share a common vision with regard to how this story should be told on screen. When the opportunity to take back the rights and work with Ed arose, I took it without hesitation.
“The central theme of HATER is, I think, more prescient than ever. It deals with some major sociological issues in a unique and confrontational way and I’m confident we’ll create a wildly original movie the likes of which hasn’t been seen before. HATER is a collision between the normality of day-to-day life in the UK today and a full-on apocalyptic nightmare.”

Hater is currently in development for a late 2016 shoot.

About HATER
REMAIN CALM • DO NOT PANIC • TAKE SHELTER • WAIT FOR FURTHER INSTRUCTIONS • THE SITUATION IS UNDER CONTROL
Society is rocked by a sudden increase in the number of violent assaults on individuals. Christened ‘Haters’ by the media, the attackers strike without warning. The assaults are brutal, remorseless and extreme: within seconds, normally rational, self-controlled people are becoming maddened, vicious killers.
There are no apparent links as a hundred random attacks become a thousand, and then thousands, right across the country. Everyone, irrespective of gender, age, race, sexuality or any other difference, has the potential to become a victim – or a Hater. People are afraid to go to work, afraid to leave their homes and, increasingly, afraid that at any moment their friends, even their closest family, could turn on them with murderous intent.
By the end of today you could be dead. By the end of today you could be a killer. Attack first, ask questions later… but the answer might not be what you expect…

About DAVID MOODY
David Moody was born in 1970 and grew up in Birmingham on a diet of trashy horror and pulp science-fiction books and movies. A pioneer of independent publishing, he first made waves with the classic zombie novel AUTUMN which was downloaded more than half a million times since 2001 and which has since spawned a series of sequels and a movie starring Dexter Fletcher and David Carradine. Best known for the apocalyptic HATER novels, Moody’s work has attracted the attention of genre luminaries including Guillermo del Toro (Hellboy, Pan’s Labyrinth) and Mark Johnson (producer of Breaking Bad and the Chronicles of Narnia films). Moody lives with his wife and a houseful of daughters and stepdaughters, which may explain his pre-occupation with Armageddon. He has a talent for creating ordinary and believable characters, and putting them through absolute hell.

About ED BARRATT and HOOK PICTURES
Hook Pictures was founded in 2012 as a vehicle for creative producer Ed Barratt to continue to work with fresh and ambitious writing and directing talent to create critically and commercially successful feature films.
Hook Pictures’ debut feature film was Rowan Athale’s The Rise (aka Wasteland) – completed in 2012 – which premiered at the Toronto International Film Festival before screening at London, Rotterdam and Santa Barbara Film Festivals whilst selling to distributors around the world and being nominated for several awards. Ed Barratt was recognised by BAFTA as a Breakthrough Brit for his work on the film.
Hook Pictures has a strong slate of projects in development and relationships with some of the UK’s most exciting new writing and directing talent. Three films are slated to enter production in 2015/16 and the company is venturing into new and original IP by launching comic book publisher Ninth Man in association with leading graphic novel publisher SelfMadeHero.