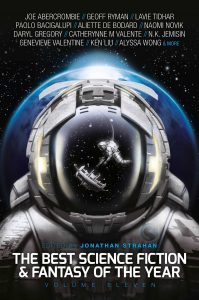 With our planetary population now surpassing seven and a half billion, I guess it’s no surprise there are more writers out there than there used to be. But it’s only when you review a doorstopper like Solaris Books’ The Best Science Fiction and Fantasy of the Year that you realise just how many.  What’s more, just how many of the how many you’ve never heard of, despite almost each and every one of them having been nominated for or winning at least one genre award of name or note. Okay, in truth, the former distinction is easy – I’ve been nominated myself – but even so …

This ignorance of modern writers is possibly mine alone – I used to read everything SF, but these days far less so, in part because of time, but primarily because it’s all but impossible to keep up with the overwhelming amount of words vying for attention. It’s an odd admission for a reviewer, but even editor Jonathan Strahan in his introduction admits there is a LOT of stuff to take in, and I defy anyone to put hand on heart and say they could comprehensively improve. Sure, there are names in this humongous 599-page collection that I recognise, but these are easily outweighed by writers new to me. In theory, this offers multiple treats – “exciting new worlds by exciting new voices!” as many a blurb used to have it – but in practice …?

Well, it’s not that any of the stories are bad – they really aren’t – but three or four barely exceed vignette or have the feel of a sample chapter that’s found favour in editorial eyes. More than a few (consciously or not) retread classic or familiar ground but with a tendency toward the overtly PC and po-faced becoming all too prevalent in today’s publishing. The humour and wit genes do seem to be disappearing from much of the genre, along with that old-style sense of awe and wonder. Perhaps it’s because we are closer now to many of the realities and technologies scribed herein than we have ever been, but seem unlikely to reach them, that the future just don’t seem so wondrous any more. You’d think the opposite would be true.

There are exceptions. A number of entries different enough to be memorable. Notable are Paolo Bacigalupi’s The Mika Model, the story of a killer A.I., with its uncompromising denouement; Naomi Novik’s honest and pragmatic fairy tale, Spinning Silver; the, how shall I say? extended movie of Sam J. Miller’s Things With Beards; Genevieve Valentine’s observant Everyone From Themis Sends Letters Home; Nina Allan’s very human The Art Of Space Travel; and Ken Liu’s Seven Birthdays.

As with any ‘Best Of …’ collection, the question becomes at how many stories do you draw the line? This has 29 and could easily have been pruned by a third. You’re left with the impression that in a crowded market it’s an attempt to make ‘my best’ collection better than ‘your best’ collection by flexing unnecessarily broad shoulders on bookshop shelves. It’s a fair enough read but at the same time seems to exist solely because there was a Volume 10 and there will be a Volume 12.  Mike Wild