Warning: preg_match() expects parameter 2 to be string, object given in /var/www/vip4/sites/vip6102689/httpd/htdocs/wp-includes/formatting.php on line 4866
 The Amazing Spider-Man: Spider-Verse - Mass Movement
x
Spread the love 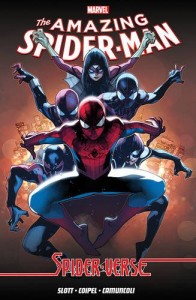 The Amazing Spider-Man: Spider-Verse – Dan Slott, Olivier Coipel & Guiseppe Camuncoli (Marvel / Panini)
This is it web-heads, this is the one that we’ve been waiting for. The multi-dimensional and parallel universes, many worlds a-go-go adventure that features not one, not two, not three, not four, but hundreds of wall-crawling heroes. It’s the big one boys and girls, in which the sons and daughters of the spider from every reality and every realm of existence (the ones that are still alive anyway) unite to fight a common enemy, one that has risen to destroy them all and wipe any trace of arachnid powered heroes from each and every corner of history, everywhere. Wait a minute, I’m getting a little ahead of myself here, so why don’t I just back up a little and start at the same place that everything does. The beginning.

When Spider-Men, Women and anthropomorphised incarnations of the wall crawler start dying, killed by a foe that feasts on their life-force, a foe that Peter Parker, or our (that is Earth 616’s) Friendly Neighbourhood Spider-Man, previously defeated one of the facets of, those that either escaped or managed not to die at the hands of, and get eaten by, The Inheritors (that’s right Spider-Fan’s, it’s Morlun time), desperately rally to gather as many different versions of the warriors of the web together as possible in an attempt to fight back, and defeat their seemingly unstoppable enemy. Involving ancient prophecy, death and destruction on a biblical scale, near impossible battles against overwhelming odds, the emergence of new and old faces, some welcome, some not, ‘Spider-Verse’ is a grand exploration of everything that makes Spider-Man (in all his multiversal glory) tick and expands, opens up and refashions the mythology of old Spidey and all of ‘amazing friends’ in a mind-boggling, cerebellum frying, catch all story that changes everything, but also holds tightly to, and maintains, the status quo. It’s a war for survival that thrives due its interweaving and intricately plotted tale that weaves its way into Spidey’s past, recent and not so recent, and opens up a myriad of possibility for not only his future, but that of every web-slinger and wall-crawler left in existence. But like every war, some soldiers fall in the line of duty, so Spidey-Fans, keep those tissues handy because dying is never easy. Even if it all works out in the end, it’s never easy.

‘Spider-Verse’ promised to be the “biggest event in Spider-Man” history, and you know what? It very well might be. Dan Slott and Olivier Coipel have excelled themselves, as ‘Spider-Verse’ is big, bold (as far as story, characterisation, relationships, what happens and what comes next are concerned, it doesn’t get much bigger or braver) and, thanks to the latter’s contribution, beautiful. That said, something this big can’t be contained within one volume and by necessity some of the action happens “off screen”, that is, in other books, which is a little annoying at times, but as all the relevant links to the other books are included, if you’re really desperate to discover those “hidden” moments, you’ve got everything you need to do so. But those missing moments are nothing more than a tremor in the web, a single broken thread in an otherwise fantastically woven tapestry, one that’ll keep you guessing, involved and absorbed until its dying moments. All together now “Spider-Men, Spider-Men, do whatever spiders can…” Tim Mass Movement