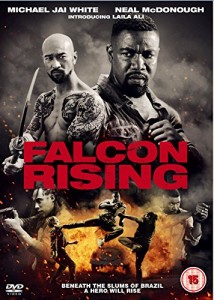 Falcon Rising (Spirit Entertainment)
If, like me, you grew up in the video age and spent more than your fair share of time in tape rental -shops, pouring over martial arts classics and fist/ gun-toting explosion filled action extravaganzas, then the chances are you’ll regard yourself as being something of a connoisseur of high-kicking, bone snapping, no holds barred ass-whoopin’ epics. So, from one connoisseur to another, take it from me that within five minutes of ‘Falcon Rising’ beginning I knew that this bad-boy was going to be a genre classic; and before you even think of asking why, and how I knew, I’ll tell you.

The film’s opening salvo introduces the audience to John ‘Falcon’ Chapman (Michael Jai-White), a tormented ex-soldier who – thanks to suffering from PTSD and flashbacks to his time in Iraq and Afghanistan – is a man with a death-wish, wanting nothing more than to join his fallen comrades. This immediately moves ‘Falcon Rising’ a couple of rungs up the ladder, making the transition from standard fare to ‘this could be interesting’; then it proceeds to scale the remaining rungs in lightning quick fashion as the frantic, non-stop plot and rapid fire action begins and doesn’t let up until the final frame fades out, leaving ‘Falcon Rising’ sitting on top of the world as the new King of The Mountain.

After his aid worker sister is beaten and left for dead in the favelas of Brazil, John rushes out to be by her side and, while trying to discover what happened to her, is plunged into a nightmare world of police corruption, organised crime and a Yakuza run child prostitution ring. And like all the best heroes of the big screen, he steps up to the plate and sets out to cripple, maim and destroy the nest of vipers controlling the slums. Combining beautifully fluid fight choreography with a “retro” plot that’s filled with all of the usual trued, trusted and beloved twists and turns and eminently quotable one-liners (“In my experience, all God is good for is giving people reason to kill each other”) ‘Falcon Rising’ is a testosterone fuelled eighties glory ride on an adrenalin charge; an out of control freight train that charges through all of its inspiration stops from ‘Lethal Weapon’, through ‘Commando’, ‘Marked for Death’. ‘Hard to Kill’, ‘Black Rain’ and keeps charging onward, ever onward at full throttle. Okay, so it’s riddled with clichés and story-wise, it’s nothing new, but clichés are clichés and exist for a reason, because they’re cool and because people like them; and as for the story, well you know what they say, “If it ain’t broke, don’t fix it”. Then there’s the hero of the hour, Michael Jai White, the one wrecking crew who unlike a lot of his contemporaries still has enough gas in his tank to not only go toe-to-toe with the baddest and the best and stand tall in the aftermath of the human debris and carnage that he’s left in his wake, and still looks convincing when he’s caught in the middle, and thick, of all the action.

Let’s face it folks, we all know the eighties were cool, and this glorious throwback to that decade is also cool. So, if you want to be cool, just like Michael jai White (and let’s face it, who doesn’t?), then you’d best buckle up, hit play and enjoy the ride. And believe me, it’s one hell of a trip. It’s time for the Falcon to rise… Tim Mass Movement