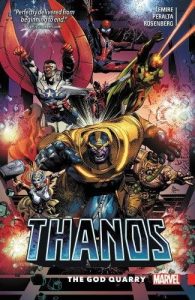 Fortune and fate can be fickle mistresses, but their ambivalence treats all creatures equally. Whether you’re a one of the countless billions of innocents or one of the most feared monsters in the Galaxy, the sisters of destiny have the same disdain for every living being that falls under their gaze. And no one and nothing is more aware of their fickle nature than the Mad Titan, Thanos. Formerly the ruler of his world and an individual so terrifying and without pity or mercy that just the mere mention of his name was enough to terrify entire systems, in the opening chapter of The God Quarry, he’s a shadow of his previous self, having been stripped of his power by his son Thane and his dearest love Mistress Death and stranded, and left to die, on Titan.

As the latest entry in his life’s journey begins Thanos is alone, cold and scavenging for food, warmth and shelter wherever he can find it, but just as he’s at his lowest ebb, the aforementioned mistresses throw their dice offer him a hand up, as his one-time foes and prior allies of Thane, Eros, Nebula and Tryco Slatterus recruit Thanos to help defeat their now mutual foe, would-be Universal conqueror, the destroyer of worlds and civilisations and their one time employer, Thane.  It’s an opportunity that the Mad Titan seizes with both hands, and in an effort to restore his power so that he can successfully face and defeat those who betrayed him, Thanos and his new allies embark on a quest to find the oldest beings on the Universe, the witches who guard and are ultimately responsible for ensuring the eternal continuation of The God Quarry. Fraught and filled with danger and challenge, it’s a journey that finally ends with father and son facing each other and Thanos realising what he always knew, that in his own mind, he is the only thing that matters and that no matter what else happens Thanos must, and will always, be Thanos.

Thanos is that all too rare beast. He knows his own mind, completely and utterly, and is driven by a single-minded clarity and determination of purpose to achieve, and hold tightly, to his overwhelming goal.  There is no deviation, just total devotion to his purpose and even when he’s brought to his knees and the Universe tries to instil a sense of humility in him, as it does in Jeff Lemire’s flawlessly executed story of the Titan who, again and forever more, would be King he fails to listen or learn from his experience. Leopards don’t change their spots, tigers don’t change their stripes and Thanos, regardless of what happens to him, will always be Thanos. Lemire knows this and uses it to help fuel his tale of the fall and rise of its central character who in The God Quarry, which incidentally is gorgeously illustrated in semi-retro slightly seventies style by German Peralta and Rachelle Rosenberg, finally learns that the only person he can ever depend on if he wishes to fully and finally fulfil his twisted ambitions and dreams, is himself and as such, forsakes all others and goes it alone. A god’s got to do what a god’s got to do…  Tim Cundle