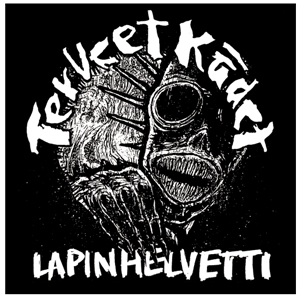 Terveet Kädet – Lapin Helvetti LP/CD (Svart)
It doesn’t seem like five minutes since I picked up Terveet Kädet’s last album “Musta Hetki” (actually a couple of years ago!) having just watched the band play a devastating gig, so this is an unexpected treat. Terveet Kädet have been going since 1980, but 35 years later they are still cranking out high speed thrash hardcore of the highest calibre. Perhaps a little more refined than the noisy roots, this is tight as hell, with wild vocals all over the frenzied riffing and pounding beats. This is more experimental than many of the other Finnish bands, with less of the blatant Discharge or Disorder worship and a very distinct style of their own. There is so much going on guitar-wise, non-stop rifforama, with touches of thrash and primitive black metal slipped in here and there, but the overall sound remains true to the fast hardcore punk old school realm. There’s no let up in intensity throughout the eighteen songs on offer here as one burst of rage chases the next, but as I mentioned before there is so much going on that it never gets dull. The album title translates as something along the lines of “Lapland Hell”, but if this is what it has to offer musically, put me on the next plane out there and give me a cold Welcome to Hell! Tom Chapman