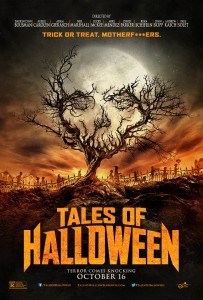 Tales of Halloween (Epic)
I always thought I was alone. That I was the only person who missed being scared by horror cinema, who missed the thrill of expectant fear and the wicked humour that used to be the calling cards of all of the great terrifying celluloid journeys into the other side. But I was wrong. I was so very, very wrong; because just when I was beginning to think that they just don’t make them like they used to, along comes ‘Tales of Halloween’, a portmanteau gathering of ten deliciously dark and devious films set in, on and around that most wonderful of celebrations, All Hallows Eve. This glorious ode to halcyon days of seventies and eighties fright filled flicks has restored my faith in everything that goes bump in the night, made me a believer again. And more importantly, has convinced me that I’m not the only twisted soul who mourns the way things used to be and longs for their return.

‘Tales of Halloween’ thrives on old fashioned scares and terror with just the right amount of blood, guts and gore thrown in for good measure. Filled with stories of demonic vengeance, ghostly retribution, monsters, ghouls, witches and things from just beyond the veil, it plays with all the traditional horror tropes and stereotypes in a highly inventive fashion in order to deliver an original, inspired, dark and disturbing film that gore hounds and horror freaks will adore. Sure, it wears its influences proudly on its scar filled sleeves, but as it features a linking narrative by Adrienne Barbeau as a local radio DJ (remember ‘The Fog’, kids?) and most of the unfortunates involved in the grizzly events are watching ‘Night of the Living Dead’ when ‘fate’ overtakes them, it never attempts to hide its love for John Carpenter and George Romero. Or EC Comics, as it’s stories of mutated, cannibalistic super-pumpkins, a hillbilly nasty having the tables turned on him following a close encounter, a kidnapping that goes awry when the victim wants to “play”, trick or treating with demons and so much, much more, could have sprung straight from the pages of America’s favourite horror comic. Brought to life by a collection of the very best cult directors and actors (including a couple of double-take and blink-and-you’ll-miss-them cameo’s from some of horror’s most famous sons), ‘Tales of Halloween’ turns the dial on the Fright-O-Meter up to eleven and embraces the devilish sense of fun and humour that lies at it’s black-hearted core. Slick, stylish and vibrant, it acknowledges it’s forebears by tipping its freshly severed head to Hammer and Amicus while flirting with ‘Creepshow’ and ‘The Twilight Zone’, before inviting its audience to peak behind the curtain and gaze upon, and lose themselves in, it’s horror filled magnificence. And you know what? It’s the most fun you’ll have being scared all year. Happy Halloween… Tim Mass Movement

‘Tales of Halloween’ is released on Digital HD on October 16th