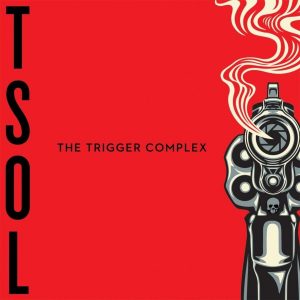 You know the old saying “You never forget your first time”? It’s absolutely true. I’ll never forget the first time that I heard T.S.O.L., which happened to coincide with the first time I heard The Vandals and D.I.. Like a lot of young punks, I stumbled across them while watching Suburbia, and even though I immediately connected with The Vandals and D.I. and their brash, straight forward, driving, semi-nihilistic punk rock, my reaction to T.S.O.L.  was, like their music, far more complex and much deeper than it had been to both Casey Royer and Joe  Escalante’s bands. Their new wave, rock’n’roll tinged take on punk coupled with Jack Grisham’s incredible voice sent jolts of electricity through my soul and shivers down my spine and made me realise that there was far more to punk rock, and music in general, than just a pounding wall of noise, playing as fast as possible, flipping the bird at society and spitting in the face of authority. While all that stuff was, and still is kinda cool, T.S.O.L. helped me to understand that you didn’t have to take punk rock at face value, there was far more to it than that and it could be far more meaningful than its petulant surface would ever have you believe. And even though he’s directly responsible for my moment of clarity and realisation, if Jack Grisham heard me say that, he’d probably laugh, call me a pussy and tell me to sink a couple of cold ones and get over myself.

Fast forward thirty years and I’m sitting here listening to the new T.S.O.L. record The Trigger Complex with a huge shit eating grin plastered all over my face, falling in love with their music all over again. That same static that set my skin alight the first time I heard Wash Away, came rushing back as soon as Give Me More kicked in and for the next thirty or so minutes, all I could, or wanted to, focus on was The Trigger Complex. But age and wisdom have taught me that first appearances can be deceptive and that it’s good practice to repeat a process in order to become fully familiar with it, and so to prove my initial hypothesis that this record was, and is, incredible, that’s what I did. I listened to it over and over again, and after an afternoon or two, realised that my initial feelings about, and thoughts concerning, The Trigger Complex, were one hundred percent correct and dead on balls accurate. It is freaking amazing. Grisham sounds as good as he ever did, their music is still driven by rock’n’roll and proto- Goth via New Wave as much as it is punk rock, and when all of those factors work in perfect communion, as they do on The Trigger Complex, something incredible happens.  And in that space where lunacy, magic and music collide, that’s where you’ll find T.S.O.L.  and The Trigger Complex. Like I said, it’s freaking amazing… Tim Cundle