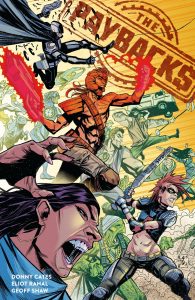 The Paybacks Collection TPB goes on sale August 01, 2018, and is available for preorder at Amazon, Barnes & Noble, and your local comic book shop.

Praise for The Paybacks:

“Simply put, The Paybacks is absolutely bloody hilarious, and it’s difficult not to be drawn in by how much fun the creators seem to have with it.”—Big Comic Page

“Donny Cates and Eliot Rahal rip everything a new a-hole and had me laughing every step of the way.  This book is the bastard child of Watchmen and Naked Gun, and yes, that is a huge compliment.”—Weird Science

“This is a series that you don’t want to miss out on; The Paybacks is a blast of fresh air in a genre that frequently takes itself too seriously.”—Graphic Policy