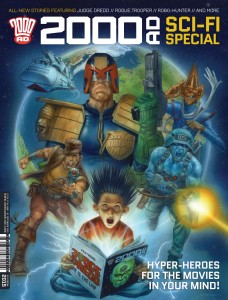 It’s a future-fuelled blast from the past this June as some of 2000 AD’s greatest characters roar back into action for the 2000 AD Sci-Fi Special – out this week!

Out in print and digital on 24 June, the 48-page Sci-Fi Special brings you self-contained stories featuring some of 2000 AD’s most popular characters.

From the return of the classic Ace Trucking Company to further futuristic adventures of Rogue Trooper and Robo-Hunter, the Sci-Fi Special brings you work by veteran 2000 AD creators such as John Higgins, Neil Googe, and Gordon Rennie is mixed with new blood such as Mike Carroll, Guy Adams, Emma Beeby, Alec Worley and Mark Simmons!

And all lovingly wrapped in a new cover by Greg Staples! The 2000 AD Summer Special is on sale in the UK & Ireland from this Wednesday (24 June) for just £3.50 and in North America from all good comic book stores next month for $6.99, as well as digitally from the 2000 AD webshop and the 2000 AD Apple and Android apps.