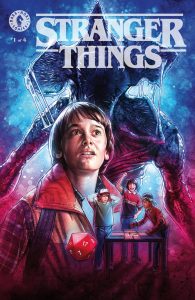 The faux 80’s, “sci-fi Goonies” extravaganza that is Stranger Things, has been a runaway hit for Netflix and rightly so. So much more than a nostalgia trip for us forty somethings, Stranger Things has restored my faith in T.V and proved that good shows that reach all ages can still be made. Inevitably, with it being such a huge hit, we are going to see it in various media forms, so with no further ado, I introduce to you, the first issue Stranger Things the comic book.

If you haven’t seen the show, then firstly-where the hell have you been and secondly, allow me to offer you a little insight. It all kicks off in a small town called Hawkins where the strange disappearance of a young boy and supernatural circumstances coincide with the sudden appearance of a girl with seemingly telekinetic powers. The girl who becomes known as Eleven helps the boy’s friends search for him, while dragging the town deeper and deeper into the mystery. A cast of seriously talented kids backed up by some familiar faces, including 90’s go to goth girl Winona Ryder, make this a must see show.

To see it in comic book form-would be cool enough, but what we get here is an entirely new story which is based on an unseen outing by one of the gang- Will in Season One. One minute he’s enjoying a game of Dungeons & Dragons with his friends, the next he’s being pursued by a strange creature. Is he sleeping, is he awake, or is he somewhere else entirely? Packaged with several variant covers including a super cool photo one and complete with faux  wear and tear that looks like one of the programmes that used to accompany every big movie release in the 80’s,( I still have my Empire Strikes Back one displayed proudly) Houser’s story is another step in the ever evolving mythology of Stranger Things and is  an absolute must have for any, and all, fans of the show… Chris Andrews