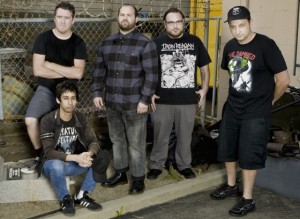 Approaching release in August, ‘V’ is STOP BREATHING‘s first LP since their No Idea Records-released self-titled album in 2012, and fifth overall release, recorded in their fifth year as a band. Deploying twelve rampaging tracks in just over thirty minutes, ‘V’ merges the restless angst of 7 Seconds, Poison Idea, The Descendents, and The Circle Jerks delivered in a fired-up contemporary attack fans of Good Riddance, Kid Dynamite, Bane and Kill Your Idols will dive headfirst into. “No Escape,” the eighth track on ‘V’,comes tearing forth today via New Noise Magazine, the band issuing with the tune, “It’s about how we are all stuck on planet earth, there’s nowhere for us to go, yet we continue to kill each other. The amount of money, brain power, and resources going into creating all these different ways to kill each other kinda sickens me. I hope one day we will realize we’re all stuck here, we can just continue to kill each other, or learn to work together and do so much more with our lives!”

STOP BREATHING will release ‘V’ on 180-gram vinyl, in two color variations, via Burning Tree Records and Rotten To The Core Records with a limited cassette version through their own Bad Touch Records on August 11th.Preorders for the LP are now live HERE.

The current upcoming run of live dates for STOP BREATHING includes a show July 1st in Ventura with Blasting Concept, another on the 10th in Thousand Oaks with Ten Foot Pole, and a record release show for ‘V’ on August 28th at the first day of Nardfest in Ventura with Dr. Know, Excel, Nails and many others.

Oxnard, California-based STOP BREATHING is a tight knit union of bandits also hailing from The Fucking Wrath, Glass ‘V’. The band’s second LP was recorded by the band and mastered by Paul Miner at Buzz Bomb Sound Labs (Death By Stereo, H20), and is completed by cover art created by Kane Shimek and Ruben Perez. With the departure of Carter to Portland and Jesse to school commitments, STOP BREATHING enlisted Chris Goodrich (Catholic Spit) on bass and longtime friend Kile Garcia on second guitar, making their delivery all the more unstoppable.