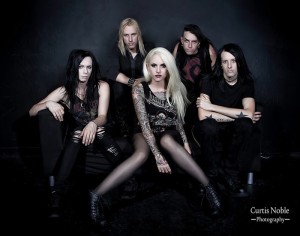 The Los Angeles-based quintet, STITCHED UP HEART, has officially inked a world-wide deal with Another Century,
who will release their debut, full-length offering in spring of 2016. In the meantime,
the group has partnered with Revolver Magazine to exclusively debut their striking new performance video
for the brand new track “Finally Free,” which can be viewed HERE. STITCHED UP HEART are
currently on the road across North America with One Eyed Doll.

Mixi (vocals) states: “We are fired up about joining the Another Century team.
There’s an amazing group of people working hard behind the scenes on this band.
We are honored to be able to work with such experience, passion, and dedication.
On top of all of it they have been my closest friends over the past couple years.
Our video, ‘Finally Free,’ will be our first release on the label and a perfect taste of what’s next for Stitched Up Heart.
There has been much growth internally and musically and “Finally Free” is a great representation of that.
We are currently on tour right now till November and then will finish our first full length release for Another Century.
Couldn’t be more pumped for the next chapter!”

STITCHED UP HEART have forged their path in sheer passion and earned their keep in physicality and volume.
Both on the road and in the studio, frontwoman Mixi and the Los Angeles-based quintet face 2016 and their forthcoming Another Century debut with brazen confidence. “Finally Free” is the clarion call for the band’s day of reckoning. Recorded by producer Mitch Marlow and captured on video by director Ron Underwood (also known as the high-flying frontman for labelmates, 9ELECTRIC), “Finally Free” delivers on the promise hinted at on their self-released EP, Skeleton Key.
Stitched Up Heart’s days of self-booked national van tours and Mixi being a Revolver “Hottest Chicks” mainstay was merely the beginning. Driven by a new level of sonic confidence and topped with the frontwoman’s soaring vocal verve,
it’s the sound of a band unapologetically coming into its own.