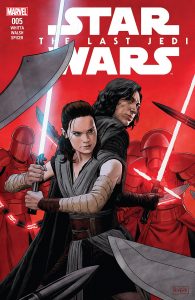 The last film tie in of the new “Disney-fied” entries to Star Wars I encountered was The Force Awakens and it was terrible. A sort of pick n’ mix of the best bits of the film hastily knocked together in a rather childish fashion. I adored the film but the book was a massive let down. With The Last Jedi I enjoyed the movie but it certainly had its faults – Mary Poppins in space being just one moment where I groaned in the cinema – so approached this adaptation with a certain degree of caution. Well, it’s a marked improvement on the adaptation of The Force Awakens. I suppose whether you are willing to choose this over a book you don’t know the story to is if you are a Star Wars super fan who will buy anything at all with the Star Wars logo on, if you loved the film so much you just have to have a comic book version of it to add to your DVD or the artwork or story telling is bringing something new to the tale …

Artwork is always a clincher for some and in this collected six issue series the imagery is rendered in a pretty simplistic manner. The recent run of Star Wars comics has gone for the ultra realistic, almost photo like, renditions but that is dispensed with here and the simplicity on display is a throwback to the 90s books I used to collect and devour in the pre-Disney days. I like it. In terms of the story … well, you’ve seen the film right? Leia, Poe Dameron and co are fleeing through space being tracked by the dastardly First Order fleet who are intent on destroying those pesky rebels once and for all. Meanwhile Rey has found a grumpy Luke Skywalker who wants nothing whatsoever to do with the force but reluctantly starts to show her the way. Like a remote island version of the Dagobah scenes from Empire. Rey is finding things she maybe shouldn’t and is becoming psychically linked to that bad old chap Kylo Ren. Will he go light? Will she go dark?

The issues that the film had are actually quite nicely dealt with through a bit of judicious editing. The rebels flying away with the First Order in pursuit could have become dull but there’s plenty going on aboard all the ships involved to keep it from sagging. Rey and Luke’s scenes are pretty powerful and hint at a darkness that was maybe sidelined for misjudged jokes in the film. Talking of sagging, the Canto Bight world is handled with more efficient and swift hand, something the movie could have applied. Highlights for me?  The scene where all went silent in the film – no spoilers, though I don’t suppose there’s any need – is granted an entire page and you imagine the silence emanating from the stark image on the page that enthralled on the screen. The climactic “final battle” is also a prime pick, as, well, who doesn’t love a double page spread full of monstrous AT AT Walkers?

All in all, it’s an enjoyable romp that captures the breathless antics and adventure that Star Wars fans will love that also suggests that maybe a leaner approach to the films may be advisable in future? Marv Gadgie