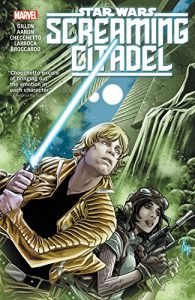 The Star wars “extended universe” occasionally throws up a really good character that you know fits just right. One who you’d love to see turn up in one of the films, even it was just a cheeky cameo, a nod and a wink to the fans. Doctor Aphra, a sort of Han Solo crossed with Tank Girl meets Indiana Jones in a space ship is one such creation. Not only has she her own series, but the scurrilous scoundrel is popping up all across the new line of Star Wars adventures that take us right back to the source, to the galaxy far, far away that we all fell in love with back in the days when the “original trilogy” were just called the Star Wars films. A rogue archaeologist who was once in the employ of Darth Vader himself, Aphra is out for herself and has no love for the rebellion. Her colours are not nailed to either Rebel or Empire mast but every so often though, she can be convinced either way. In this cross over event that spanned a number of titles then, we find the devious Doctor teaming up with a certain naïve, not quite a Jedi yet farm boy from a desolate place furthest from the beating heart of the galaxy. Ulterior motives abound and we’re not quite sure why she is so keen to get young Luke to the titular Screaming Citadel. Something about an old Jedi holocron, some all powerful Queen who takes guests once a year and have them line up to impress her with gifts, curiosities and artifacts from the four corners of the universe.

What we have a here is a marvelous slice of pulp Star Wars mayhem. It’s bright and brash and full of colourful new worlds, aliens and characters, along with the tried and trusted band of rebels we know and love. Aphra’s droids are a fantastic comedy double act. Like a sinister inverse R2 and 3-PO – which I assume is entirely intentional – we have bad droids who revel in carnage, mayhem, killing and torture. Out for themselves, just like their Boss, they’d probably even sell the Doc out if it meant there was something in it for them. Like Rogue One’s K-2SO, they have achieved a sentience that goes beyond mere servitude and added new human traits such as sarcasm, selfishness and a love of violence to their programming. Naturally they are coloured black instead of shiny gold and bright white, blue and chrome … As if the analogy wasn’t hammered home enough Aphra also has a huge and terrifying Wookie as a travelling companion. He too, is not shy when coming forward if violence is on the cards … It’s no wonder we love her is it?

As the story is compiled from a number of titles – Screaming Citadel, Star Wars and Doctor Aphra – it has a strange disjointed feel, if not in the tale told but in the very noticeable variations on the art work. This actually works in its favour however, as the Queen, another good addition to the universe I spend so much time in, appears a normal Lady Gaga like human in some pages, but a mystical elemental type in others. Is she a Sith, Jedi, a Force Witch of some description? Who knows? Although the yarn does wind its way to a satisfying conclusion, let’s be honest here, we always have an inkling who will come out on top eventually, it’s proper good Star Wars-y fun getting there and yep, I’ll keep following this Aphra lass to which ever hive of scum and villainy she travels if it’s this much fun … Marv Gadgie