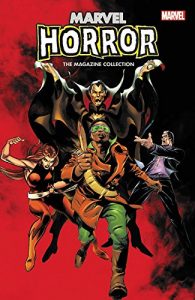 One of my earliest memories is going down street to stop with my Grandma and to keep me occupied while she wazzed around the shops with me in tow, she bought me Marvel’s Star Wars magazine. Later on, probably in the same year, while on holiday, I splurged a chunk of pocket money on Marvel’s Dracula magazine. Within these pamphlet’s pages, I believe I had my first experience of comics that were far, far removed from Whizzer and Chips or the Beano which were staple entries on any self respecting kid of the late 70s early 80s reading list. I was introduced to monsters, beasties, space ships, aliens, far off planets and dark, macabre tales … I was smitten. Strange Hill and Sid’s Snake were old news now. I vividly recall these mags that were in content, just like the American comics we know and obsessively collect nowadays, but in size and shape more in keeping with the standard fare of the UK newsagent’s shelves. A peculiarly short lived phenomena, as comic books continued to sell by the bucket load, the magazines eventually faded away and now exist only in fond nostalgic thoughts and every so often, chancing upon a pile of Planet of the Apes or Star Wars mags at a junk shop/car boot sale/charity shop or whichever treasure trove you take a chance on with fingers crossed. Well, if like me, you have hazy memories of these strange comicazines and want to see if they were as wonderful as you remember, Marvel have packaged up a compendium of carnage lifted from these long forgotten pages for the modern day reader to investigate.

Blade gets a hefty proportion of pages and unlike the super cool Wesley Snipes action movie hero you may know from the turn of the century, he comes across as a real cheesy Shaft with a pile of wooden stakes. Groovy 70s vampire action aplenty, the tales follow a similar pattern: the vampires who are in constant conflict with the street wise slayer kidnap various women and Blade battles baddies to vanquish vampires and get the girl. A twist on proceedings is that our hero seems to have been transplanted from a Blaxploitation flick to the streets of London with black cabs, famous landmarks, telephone boxes, bobbies on the beat and “’Cor blimey mate” everywhere. Fun in an unsophisticated manner. It’s definitely of its time.

Things, thankfully get a bit wilder and weirder as we plough on in to the dark black and white imagery. The style of some of these macabre missives seems to be all about atmosphere and swirly ambiance rather than an actual narrative. There’s a great deal of captions rather than speech bubbles in some as if listening to a tale being told as oppose to watching a tale unfold and a number of the one shot shorts bring to mind Creepy, Eerie, EC Comics et al but with one major difference. Where the Crypt Keeper and co’s output was laced with an impish glee and twisted humour, not to mention twisty tales, these Marvel efforts are more about dark misery and downbeat death and doom. Not so much a smart arse sting in the tale(s of the unexpected) more a ghoulish everybody dies nihilism. Stand outs for me are The Nightmare Patrol (a group of battle weary troops in ‘Nam come up against a ghoul in their ranks); In The Shadows Of The City (in to the mind of a serial killer, and it’s just, well, downright nasty) and the “modern day” for the 70s(!) CB radio horror Voices which reminds me of a gritty TV play I saw once where the square neighbour bloke off of Ever Decreasing Circles plays a sinister member of a shady organisation trying to brainwash members of the public in to murdering each other … Lordy … Very much of their time, these tales are not quite as timeless of as the ones from EC and I’ll not be rushing to replace my Creepy collection but there’s plenty of nostalgic charm and imagination in the gloomy artwork. It’s as if Marvel had created an edgier and darker take on horror that may have been aimed to appeal to those wild kids who would grow up to prefer the slasher and gore flicks of the Video Nasty era to the cosy gothic Hammer stylings of their Dad’s favourite films. Half decent. Marv Gadgie