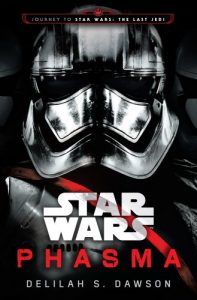 Nothing is ever black and white, not even in the Star Wars Universe and sometimes, as it does in Phasma, the line between the light and the dark becomes more than a little blurred. With the collapse of the Empire and the rise of the First Order and the gradual erosion of the New Republic and the establishment of the Resistance, it would appear that even in that galaxy far, far away the old adage about things changing but ultimately staying the same holds true. And even though the places are different and some names and faces are still fighting the good fight, a new host of characters has risen to carry their respective beliefs and banners forward in the seemingly eternal struggle that’s being waged among the stars. One of the newer players that emerged from the mists of the First Republic was Captain Phasma, an indomitable, chrome clad stormtrooper for whom duty and service are everything; and while her role in The Force Awakens was relatively minor, Delilah S. Dawson’s gripping, incredibly detailed and fascinating story of the First Order soldier’s origin and fight to not only survive, but to constantly “better” her position, would suggest that Phasma is destined to play a far larger role in Snoke’s designs for the galaxy.

Told for the most part as a third person narrative in which Phasma’s tale is relayed to one of her fellow officers by a captured spy, Phasma is a brutal, harsh and revealing study of the lengths that certain individuals will go to in order to achieve their goals and the sacrifices that they’re willing to make in order to fulfil their objectives. Phasma was born to serve the First Order, the perfect candidate to become an officer in its ranks, and even though she was raised in relative savagery, as soon the opportunity to become a part of the new darkness spreading its cancer from system to system presents itself, she seizes it and does whatever she deems necessary to hold on to her chance. Unfortunately, that involves her making a lot of morally suspect and devious decisions which send her down her chosen path, but also leave her soul forever stained and soaked in the blood of innocents and enemies alike.  Dawson manages to tell a character based rip roaring, but thoughtful, adventure that humanises the Stormtroopers of the First Order and almost legitimizes the reasons they, and others, choose to fight for it, which blurs the traditional tropes and ideas of “goodies” and “baddies by reinforcing the notion that everyone is the hero in their story while also establishing and building a bitter and incredibly personal rivalry between Phasma and one of the other central characters of the novel, Cardinal.  Well written, furiously paced, imaginative, clever and always careful to stay within the confines of, and loyal to, canon, Phasma reminds me just why I fell in love with Star Wars when I first saw it on the big screen forty years ago and it’s reassuring to know that the future of franchise, at least in literary terms, is in safe, and more than capable, hands. The journey to The Last Jedi starts here… Tim Cundle