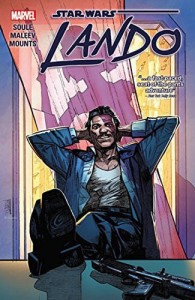 Everybody loves a scoundrel. Most people might not want to admit it, but deep down we all have a sneaking admiration and grudging respect for those folks who resolutely follow their own path, stick firmly to their guns, skirt and slide around the law and play fast and loose with rich people’s money and the absolute rule of authority. While Han Solo is most assuredly the biggest rogue in the Star Wars universe, the charismatic conman, professional gambler, leader of Cloud City and Rebellion General, Lando Calrissian has always taken a more then respectable second place on the rascal chart behind the captain of the Millennium Falcon. Which, incidentally, in case you didn’t know, used to belong to Lando before he lost it to Han. But of course you know that. Everybody knows that. After all, that’s Star Wars 101, right? Right.  So, it was only a matter of time until Lando emerged from his more “famous” friend’s shadow and his story was finally told, which Charles Soule does in pulse pounding style in Lando.

Set between the time he lost the Falcon and won Bespin, Lando finds it eponymous hero, accompanied by his best friend Lobot, agreeing to steal the personal space yacht of an Imperial bigwig in order to pay off a rather substantial gambling debt. Having recruited a team of “specialists” to aid them in their endeavour, Lando and Lobot come up with a “fool proof” plan and make off with the ship. However, it soon becomes apparent that in the Imperial circles some people are far more powerful than others, and the ship that Lando and his crew have appropriated belongs to the biggest fish in the galactic power pond. Before any of them can offer up a prayer to the Force, they’re being pursued by one of the deadliest bounty hunters in known space and a trio of Star Destroyers. And if that wasn’t enough to put him off his game, what’s inside in the ship, hidden away from prying eyes is far more dangerous than anything outside it, and one by one they start falling victim to it. It really isn’t Lando’s day.  Beautifully realised and illustrated by Alex Maleev, Charles Soule’s story is a wonderful throwback to the original trilogy that focuses on characterisation (and the relationship between its central players, and how it changes and evolves to become the one we’re familiar with in The Empire Strikes Back) as much as plot and for any fan obsessed by that galaxy far, far away it’s the perfect book to while away an afternoon with.  It’s Lando’s time to shine… Tim Mass Movement