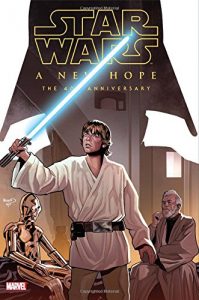 If you don’t know the story by now, then really, you need to turn off the internet, go to the shops, buy the DVD, come home and watch Star Wars right away. Really, is there any other way that this tale can be presented to us forty years after it changed the world? I’m talking of the original, the proper one, the first Star Wars film. The one that was known for many years simply as Star Wars. No Episode IV or New Hope carry on. Just Star Wars. It’s been told and retold so many times do we really need another graphic novelists take on that galaxy far, far away? Well, after unwrapping this latest Marvel missive from said distant galaxy, it appears that yes, yes there is yet another way of offering up to the ever expanding fan base yet another format to follow the exploits of that farm boy from a scorched planet as he sets of on an heroic quest. The “cover version” …

What we have here is a collection of would be covers for a would be graphic novel based on every scene in Star Wars each by a different artist. Like a covers album for some legendary band, I imagine each artist was given a set moment in the film and asked to interpret however they like as if it were to festoon the front of a comic book containing that segment of the epic escapade.  A whole page is given over for the finished piece and the opposite contains a short paragraph detailing the story and various concepts and rough sketches from the creative process.

Fans of Star Wars art – and there is a market for this, judging by the amount of “Art of the film” books that fill the shelves in Waterstones as well as Sci-Fi/Fantasy outlets like Forbidden Planet – will lap it up and leave it on a coffee table to flick through with a cuppa. Fans of comic books who are expecting an actual story, will probably want to pass, as although there’s a story, most of know it off by heart, word for word any way. So the art itself then. Highlights for me then:  Ryan Stegman and Jordan Boyd’s “I’m going to regret this” C3-PO contribution where everyone’s favourite protocol droid seems lost in thought with a certain Sith Lord and his stormtroopers haunting his robot mind. Tusken Raiders looming over Luke and Ben Kenobi in a fearsome pose is another cracker from Keinil Francis Yu and Sunny Gho. The iconic Garfi Stick raised aloft pose will always strike a chord with me.  Kevin Nowlan obviously drew the long straw with “These aren’t the droids you’re looking For” and Mike Mayhew should be commended for a drunken cantina patron rocking out, pint in hand, to Figrin Dan and Modal Nodes! There’s a couple of beautiful Leia efforts and a very poignant rendering of her witnessing Alderaan being obliterated. Talking of obliteration, the final Death Star destruction moment is captured in a slice of nostalgia that throws us back to those heady days of the Marvel comic magazines by Mike del Mundo. On top of all this there’s a lengthy interview with the writers of the current incarnation of Marvel’s comic book Star Wars titles and a reprint of issue #1 from all the way back in 1977.

I’ve loved Star Wars since I first saw Empire Strikes Back at the cinema in 1980 and my head exploded with excitement. Over the years I have continued to live in that weird and wonderful world and have pretty much “flown from one side of this galaxy to the other … seen a lot of strange things” but despite my initial cynicism, it does indeed appear that there are still new and different ways of exciting Star Wars fans with the same old story. There is a reason for this of course. That same old story is so utterly magnificent I’ll never tire of it! Ever. Take my money now…  Marv Gadgie