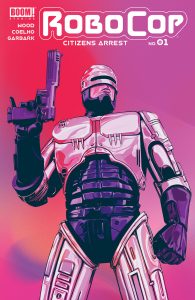 It’s fitting that in a time where our phones have become the most powerful thing that we own and that the companies who build these phones, hold that power and information in the palm of their hand to use however they see fit, that a (fictionalized) despicable multi-national conglomerate should make a return. Bad news for everybody, but more so if you live in Detroit. The company in question is Omni Consumer Products, better known as OCP from the fantastically satirical and violent 80’s classic RoboCop. Reborn in comic book form here by Boom Studios, RoboCop: Citizens Arrest, like its movie predecessor presents us with a dystopian future that doesn’t take much of a stretch, and isn’t too difficult, to imagine. Corrupt government officials, privatized police and health services, apps that control your life. Sounds uncomfortably familiar right?

With OCP reborn, the police have been retired and an army of robot cops now patrol the streets upholding the law…to the letter. The R/app launched by OCP and a mandatory download for all citizens, gives the user the power to report a crime instantly. But with monetary bonuses for reporting crimes, things soon get out of hand. Original RoboCop Alex Murphy, now a shell of his former self after being lobotomized by his former employers, is living out his life on the run and trapped in a program that severely restricts him. With all major cities across the world interested, it’s down to one disgruntled ex-cop, to track down Murphy and help bring down OCP before the R/app goes global.

Writer Brian Wood has made an excellent job of giving a familiar character a new lease of life, whilst maintaining everything that made RoboCop, well, RoboCop in the first place and illustrator Jorge Coelho has imbued the book and the franchises familiar themes and ideas with his own incredible flair and style. It’s dark, it’s depressing, it’s satirical and it’s RoboCop, just as we like it... Chris Andrews