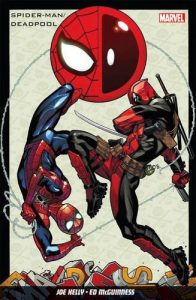 History is littered with pretty strange partnerships and decidedly odd duos teaming up to do whatever it is they have to do in the fight against evil. Captain America and Falcon, Holmes and Watson, Fafhrd and the Gray Mouser, Reneee and Renato, they’ve all had to learn to work together and have earned their stripes in the face of overwhelming adversity. While each dealt with their own personal demons and overcame them to enter the halls of greatness, trying to do that when you been forced into collaborating with someone whose head is full of monsters, personalities and voices telling him to do all of the bad things, well, that’s a tough gig that goes above and beyond the call of duty and would have tested even Stan and Ollie to breaking point. But that’s the impossible position that Spider-Man finds himself in when everyone’s favourite kooky scamp Deadpool suddenly becomes his newest, bestest friend.

Thrown together in what at first, seems a totally random Wade Wilson event (you know, the kind of thing I’m talking about, one of those things that you have no say in and just happens to you), it soon becomes apparent that there’s a method to Wade’s madness, as he intends to befriend Spidey (which is no easy task given the whole Avengers thing) so that he can get to his “boss” Peter Parker…and kill him. That’s right kids, Deadpool’s been hired to take out old Pete and having been told that the head of Parker industries is the kind of genocidal geneticist that would make Joseph Mengele look like a kindly, family Doctor, it’s a job that Wade accepts happily and without hesitation.  Some contracts though, take a little longer to fulfil, and on his way to putting a couple of rounds in Pete’s head, and along the path to job completion, Wade and Pete (sssshhhh, Deadpool doesn’t know his secret identity) save South American narcotic producing villagers from the pestilence ridden super villains Styx and Stone, stop Mysterio subverting Parker Technology and end up being the main dancing attraction on a nightclub stage while on one of the weirdest double dates in the annals of dating.  Oh, and then Deadpool ends up saving Spidey from Hell after putting him there. That might seem like a whole lot of superhero action to have crammed into one book, but believe me, I’ve only just scratched the surface of the many disparate, gratifying and wholly satisfying interwoven plots that are piled on top of each other in Isn’t it Bromantic?.

Kelly and Mc Guinness’s story is built upon layer after layer of vivid characterisation, ingenious and hilarious dialogue, the kind of detailed and deliciously enacted plots that would make Booker Prize winners green with envy and mind bendingly detailed and achingly beautiful artwork.  See, this is one of those team-up’s that you dream about, and when you hear that it’s finally going to happen, heap a whole lot of unrealistic expectation upon. For once though, that mountain of promise that lives in your imagination and nourishes and feeds your ideas of how good the story is going to be, it doesn’t even come within spitting distance of how good Isn’t it Bromantic? actually is. It’s ten times better than I thought it could ever be, far surpassed all of my hopes, and is one of the year’s best and, almost certainly, underrated books.  Believe the hype, Spideypool is here…  Tim Cundle