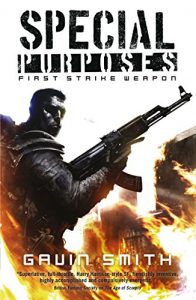 The year is 1987. A Russian Spetsnaz team is sent to the United States to activate a new weapon against their capitalist enemies. They don’t question orders, they just follow them. The mission is under-equipped and comes with a discouraging lack of information about the weapon they have been sent to set off. When only a strange mist is released from the decidedly un-bomblike cylinder they realize that they have become embroiled in an encounter that is biological/chemical in nature. What they don’t yet comprehend is the scale of the event or its nature. Within a matter of minutes they know that they have just triggered the apocalypse; the zombie apocalypse. Chaos ensues and collateral damage, well that’s part of the apocalypse. What surprises the team most, though, is that those who are killed rise again but retain their intelligence and skills. Now they must fight more than the American enemy, they must battle against their own hunger if they wish to return home. This zombie Spetsnaz team still tries to do what’s best but now their sworn enemies become their chance at repentance. This crack team of commandos from the USSR battles hordes of fellow undead in order to attempt to save a group of living humans, not just to save their own rotting skins but also to try to atone for their many past sins.

Zombies have invaded pop culture to the point that even I shy away from them at times. One of the great things about this book is that I got hooked on the story way before the first flesh-eater rises to consume the closest living person and by the time the first head shot is necessary the action is at such a pace that there was no way I would have stopped reading. The way Gavin Smith approached this end-of-the-world scenario, I was so entranced by his writing that all I could do was proceed. I love (love, love, love) it when a writer takes one of my favorite fictional monsters (or even hordes of them) and creates a new way to look at them. He gives them something more than the ability to paralyze their victims with fear, he gives them humanity… Jim Dodge