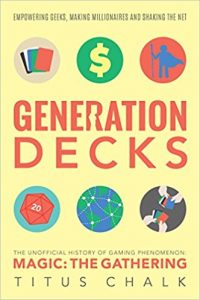 From its humble beginnings on handmade cards playtested by a bunch of college buddies to its current place in the history of gaming, Generation Decks reveals the complete history of trading card game Magic: The Gathering. It’s a rich story that unfolds as Titus Chalk tells us of this revolutionary game designed by Richard Garfield and brought to the masses by then-start-up company Wizards of the Coast. The author brilliantly weaves personal experiences with interviews and hard-sought facts in order to properly describe the impact these little rectangles of cardboard have had on the world. Within these pages you will learn how a revolutionary new gaming idea turned nerds into stars, some of them into very rich stars, and at the same time helped nurture the invention of the internet as we know it today.  It is a tale full of glory and failure, highs and lows… you get the idea. This isn’t a sparkly, bubble promotional pamphlet, it’s a truly complete history of the game’s ups and downs as written by a fan who’s finally embraced his love of his own geeky tendencies.

As someone who has never played the game or purchased so much as a single card I expected to open this book and yawn, not caring a whit about Magic:The Gathering. Much to my surprise I was immediately deeply involved in the story and found myself wishing I had jumped into this game from its very beginning. I grew increasingly excited about every facet of the game from collecting the cards to playing hands of Magic. No, I have not done so, yet, but my son and his friends have begun to play and it’s only a matter of time before I worm my way into a game or three. Not only is this a very comprehensive look into the game (especially for an “unofficial” history) but the way Titus Chalk has written it drew me in like it was one of my favorite fantasy novels from the 1990s. If the authors of history textbooks wrote their ponderous tomes like Titus Chalk has written this book, every school kid out there would be acing their history tests, all the time. If you have ever played Magic: The Gathering or even had a passing interest in delving into this game, Generation Decks is guaranteed to renew and refresh your passion for a hobby that has turned nerd-dom into a worldwide phenomenon. Jim Dodge