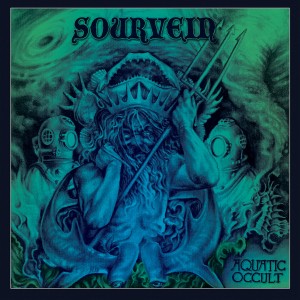 North Carolina’s finest riff machine T-Roy returns with another slab of sludgy goodness from the mighty Sourvein. It’s a tribute to the man himself, that this band are still making such good records. Formed in 1993, T-Roy’ sheer will to succeed has seen this band come through, depression, alcoholism, minimal label backing and even death to deliver a fine new album and with a new home in Metal Blade Records no less.

Produced by Mike Dean (of C.O.C) “Aquatic Occult” offers nothing new – but that’s how we like it. Just giant chunks of Eyehategod style, low end riffing. Raised in the Cape Fear area, T-Roy’s upbringing was a far cry from the Beach Boys ideal, so often associated with life by the surf. Bands like Black Flag, GBH, Motorhead, Flipper, Amebix, and Bad Brains quickly became favorites as well as Black Sabbath, Blue Cheer and Lynyrd Skynyrd. Indeed it’s the latter influences which shine through on the bluesier tracks such as “In the wind”, but that Motorhead thunder is never far behind. “Avian Dawn” is a mid-tempo Trouble-esque stomper, while “Ocypuss” really showcases the band at their peak. A rumbling bass line, bringing in a huge signature riff and viscous vocals. T-Roy is clearly reflecting on his upbringing with the dark melancholy of “Cape Fearian” while “Bermuda Sundown” is very much Sourvein’s “Planet Caravan”.

After the death of two family members and a band mate T-Roy, by his own admission,  says “he lost it there for a bit”, but now he’s back and with this more positive outlook Sourvein , look to finally claim their rightful place at the main table. After helping bands such as High on Fire, Dillinger Escape Plan and Mastodon get there first gigs (at the infamous Dixie Tavern) “Aquatic Occult” could be the album to see them elevated to those heights. ..… Chris Andrews