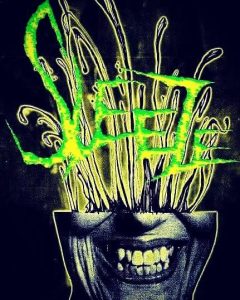 You may have never heard of Isaac Hare or his band Sleeze but chances are a couple of his family members have places of honor in your music collections. Rather than attempt to cash in on “I’m related to…” Isaac and his band mates are creating their own legacy. With a sound that puts me in mind of Down if they were fronted by Dax Riggs, Sleeze is sure to make an impact on not only their home state of Illinois but on music fans across the world.

MM: How old were you when you started playing music? Do you play any instruments?

Isaac Hare: I started playing keyboard in my first band when I was in third grade when I lived in New Jersey with Doyle and my Mom. Our band was called Dead by Society. I was the youngest in the band the other members were like in eighth grade or some shit. Our songs were about shooting up herion and zombies. I can play a little bit of guitar but I only know the basics.

MM: Were you any good?

Isaac:  We sucked but we thought we were gods then!

MM: How long did it take you to develop your style?

Isaac:  I really don’t have a style. My guitar player writes the riffs and then passes it to me and I write the lyrics that go over it. Or we will just have a couple beers and work on them together.

MM: How long has Sleeze been around? How did you get together?

Isaac: SLEEZE has been around for seven years. I started the band when I was a sophomore in high school in 2009. I didn’t have the money or interest in sports. I just wanted to write some heavy fuckin shit. My high school was cliquey and I didn’t want to follow it. So I started a rock n roll band. I started it with three other members and in just two years I found the members that have been with me since.

MM: With your father and your uncle both being members of The Misfits (Doyle Wolfgang von Frankenstein and Jerry Only respectively) have there been expectations placed upon your music?

MM: While I’m sure having family members that play in bands is influential, what are your other influences?

Isaac: Sabbath and Zeppelin all the good ones. Motorhead, Jimi, The Doors…FUCKIN heavy shit man.

MM: How would you describe the musical style of Sleeze?

MM: Are there Sleeze albums for people to check out? Where can we find them?

Isaac: Reverbnation.com/sleezey69, soon to be iTunes and we will have our new album out in the next couple months. With physical copies.

MM: Have you tried to get signed by a record company or are you DIY?

MM: If you could tour with anybody, who would you choose? What stops would you like to make?

Isaac: Any big band that is willing to take us out on tour and where ever they wanna go.

MM: What one song would you like fans to remember you by?

Isaac: Dust in the Wind by Kansas.