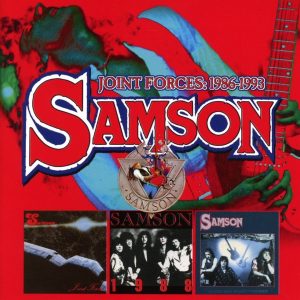 Post Bruce Dickinson and not as metallic as some may expect, Joint Forces saw the legendary guitarist re-group and introduce a lighter side to his NWOBHM stalwarts. Returning to vocal duties and expressing a deeper feeling for the blues, Joint… doesn’t disappoint, but in fact offers a different feel to what many would have come to expect, 1986 saw the band heading for new ground, especially as they were opening on Iron Maiden’s UK Somewhere On Tour. The guitar work is as driving and expressive as ever, but the gentler over-all sound shows a more polished sheen to the band.  Also featuring the 1988 five track EP And There It Is, it reinforces the commercial feel the band were pushing for at the time. Thirty-two tracks that capture Samson in their later years including bonus tracks coupled with pictures and liner notes by Malcolm Dome ensure that this is a retro recording well worth picking up. Mark Fieldhouse