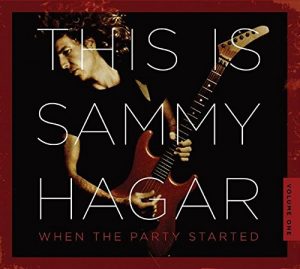 The Red Rocker returns with a fourteen-track compilation album of solid stand up tunes  originally released between 1999 and 2006 that contains a couple of new additions, No Worries and Never Said Goodbye. Sammy is best when left to his own devices and it’s here during his solo offerings that his finest work can be found. When the Party Started has soul and feeling rooted in every single tune, the vocals reek of charisma and the sense of FUN is abundantly apparent throughout, all of which combine make this one of Mr Hagar’s career defining releases. Paced bluesy rocker Stand Up delivers a heavy groove and open proceedings; Sammy means business, and he confidently pushes his output to maximum overdrive. Yes this is a rock record, but it is so much more also. The continuous change of tempos and rhythms stops this from becoming a monotone, expected release. The highly amusing lyrical content of Shag displays his natural down to earth sense of humour, whilst during Sam I Am it’s immediately apparent that this rocker doesn’t take himself too seriously. Serious JuJu is a belting rocker of a tune, so when the likes of Little Bit More brings the tempo to a way more relaxed pace you get a feel for the diversity which Sammy Hagar immerses his creativity in and when placed alongside beachcomber tracks like Tropic Of Capricorn or Maui Wowie it just adds to the records party vibe. Picture yourself catching some rays, down at the beach tavern, or nonchalantly settled in with good company on a well-equipped terrace bar because that’s what it’s all about. Good time rock’n’roll… Mark Freebase