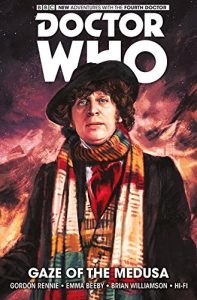 Everybody’s got their own Doctor and almost without fail, that Doctor is the one that you grew up with. The Doctor who introduced you to a multitude of worlds and the time vortex as he traversed it in the Tardis, righting wrongs and more often than not, inadvertently saving the universe through a combination of luck, cunning and intelligence. And more recently, lots of running. Lots and lots of running.  For me, growing up with Angel Delight, corduroy pants, Star Wars and Raleigh Grifter’s , my Doctor was the Fourth incumbent to assume the mantle and while he’s slipped up and down my which-Doctor-is-best scale, he’s always been, and will always be, in my Top Three.  However, before the arrival of Gaze of the Medusa it’d been a while since I’d read any of his four colour adventures. Any misgivings I might have had about this tome where immediately waylaid  when I noticed the authors names, Gordon Rennie and Emma Beeby. Being familiar with the tales of the Doctor’s escapades that they’d penned for Big Finish (namely My Brothers Keeper, their chapter in 1001 Nights, Tomb Ship and The Doomsday Quatrain)  I was fairly sure, even before I dived headlong into this story, that number Four was in safe, and more than capable, hands.

And I was right, as in Gaze of the Medusa Beeby and Rennie guide the Doctor and Sarah through a story involving strange artefacts and antiques, time travelling Victorians and a weird, wonderful and strangely fitting explanation for the gods and monsters of Greek mythology; one that Erich Von Daniken would heartily and thoroughly approve of.  Utilising the inevitability of fixed points in history to intertwine the fates of the Doctor and Sarah with that of the villain of the hour while gently exploring the idea that grief and desperation can make even the most rational of people do the most horrible of things, Gaze of the Medusa feels, from the first page to the last, like a classic Fourth Doctor story.  Featuring a similar pace and tone to The Talons of Weng Chiang, Pyramids of Mars and Horror of Fang Rock it could easily have emerged from the smoke filled writers rooms that Terence Dicks and Robert Holmes called home in the long lost era of the three day week. The dialogue and characterisation is almost note perfect and reeks of fantastic nostalgia, transporting, you straight back to Saturday tea times during the latter half of the seventies while Brian Williamson’s art wholly and completely captures not only the likenesses, but also the spirit, of the Doctor and Sarah. Gaze of the Medusa is everything that I hoped it would be and so much more besides, and every time I read it, I keep expecting to hear Tom Baker offer me a jelly baby and the sound that indelibly etched it’s way into my imagination so long ago, the instantly familiar groaning and wheezing that accompanies the arrival of the Tardis. The Doctor will see you now… Tim Cundle