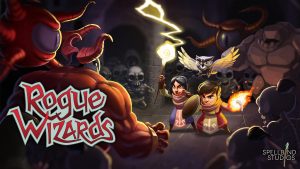 I’m a barbarian and if I could wear a loin cloth, studded leather, swing a mighty sword and expose my erect nipples in public I would.
Alpha male runs strong through these genes and that extends to my game characters, character choices are always male, voices always booming and warlike and he better have a Mohican with a beard…oh and a face tattoo.
So what about the conundrum of a game like Rogue Wizards? I spend an hour arguing with myself that wizards wear dresses and not robes. I take a quick look over my shoulder to make sure no one is watching and slip on a dress to see if it fits.

Rogue Wizards is turn based tit for tat, you hit me I hit you basic loot hoarding based dungeon crawler with a very loose story line and not much else. Something about different element rifts and kicking the backside of their appropriate bosses. I have to admit not wanting to immerse myself too much in the storyline, I was still feeling a little dirty by donning this dress…sorry, robe of ‘wandering light +1 to intelligence while a gem is socketed into my ass with a 1% chance for knockback freeze’.

You start the game by wandering these beautifully animated and colored elemental rifts looking for other like-minded wizards (and the occasional pet) to help you along your travels. On completion of that said rift they open up a very convenient store back in your home town. These stores are the generic, blacksmith, mage, armor type of fair and to be honest what they offer throughout the game doesn’t really add much to the gameplay. 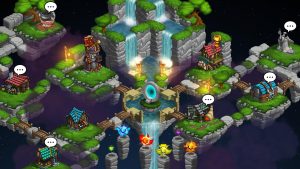 Play style is nice with the fact you can be anything you want to be, no making genre defining choices from the outset and having to stick with it for the duration of your play through. You can switch between melee, ranged and magic on the fly and at will, although be forewarned this will take up a turn within a battle scenario and that can be a problem if you’re not concentrating.  As you begin to battle through the plethora of rifts you will come up against a multitude of enemies that relate to the element of that rift, ice world houses freeze type enemies, fire rift is home to burny type enemies. It’s not rocket science and it’s not very in depth either, fire based enemy? Sling some ice at them, Ice enemy? Sling some fire at them, earth elemental? Bonk them on the head with your pointy iron stick, and so on! 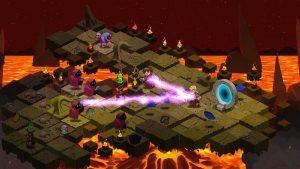 So where does this game mainly succeed? Well a dungeon crawler lives and dies by its loot hoarding, Rogue Wizards has this in abundance which also leaves itself a little redundant with it at the same time. You see Rogue Wizards has a neat little mechanic as in the items you equip will slowly upgrade themselves and ‘level’ over time as they are used in battle. Each time a weapon, dress (sorry robe), trinket etc goes up in level it adds a neat little upgrade. Therefore a low level item can really compete with some of those mid-level upgrades found around the dungeon. It makes finding new stuff not as exciting as it should be and you really end up staying with low level items longer than you really should because of this mechanic, however it’s a neat touch and I really liked it! 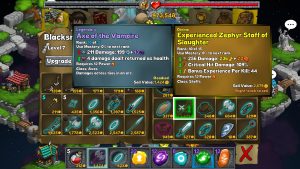 Please note this is not a game for the in depth role player or someone who mulls over stats hour after hour trying to nail the perfect build. This is a simple turn based dungeon crawler that is a lot of fun while it lasts, I didn’t have the stamina to see it through to the end because after 12 hours I believed I had seen and gotten everything out of this game. On a final note the game does have a minor faux pas for me and that’s the emittance of physical appearance changes, I like to see my loot change the appearance of my character and in this game it’s absent, a real shame!

Regardless of its plain rock, paper, scissor playstyle the game did surprise me and hook me in with its cute cartoony style graphics that lends itself quite nicely to the those old Saturday morning cartoons! In short this is just a fun game and I thoroughly recommend it for people who enjoy this genre. Rogue Wizards is not trying to be something it’s not, you can tell the developers have put a lot of love into this game and it shows. 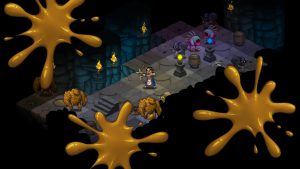 Now please leave me be as I remove this god damn tight dress and take my nipples outside for some fresh air, thanks! Alan Wright