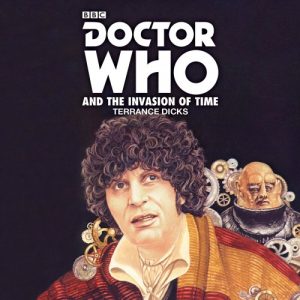 The Doctor’s gone rogue! He’s declared himself President of the High council of Time Lords, betrayed his people, banished Leela to the wastelands of Gallifrey, and appears to be in league with a race of (not particularly nice) aliens with wobbly voices called the Vardans. This is what we want – the Fourth Doctor as Time Lord gone bad. Boom! FTW! (As the young people used to say.)

1978’s epic six part adventure started well, but I remember The Invasion of Time as a bit of a curate’s egg. Don’t get me wrong; episodes 1 and 2 were spectacular. I remember feeling both completely baffled and absolutely heartbroken as a child seeing my hero acting so out of character. But to be honest…it all got a bit confusing from there. Episodes 4-6 I remember as being a confusing mass, but (and there are  pretty large spoilers here) was actually a rather mature, multi-layered plot comprising of Time Lords planning to outsmart the Doctor, the Doctor secretly planning to thwart a Vardan invasion by wrapping their planet in a time-loop, the Vardans actually working for our favourite sentient spuds, the Sontarans and the Sontarans revealed as the real masterminds behind everything who, as it turns out, were preparing to invade Gallifrey all along. Phew!

That was the television adventure. This review focuses on the BBC’s new audio retelling of the classic Doctor story, and a far more coherent and cohesive version it is. John Leeson (the voice of K9) narrates Terrance Dicks’ original Target novelisation at a well-measured pace, shuffling a deck of character vocals with consummate ease.  He has a voice that is both engaging and wonderfully easy to listen to, and any ‘plot knots’ that had the 8 year old me confused by those last 4 episodes completely disappeared. There are fans who have accused Dicks’ writing as ‘plodding’, and ‘boys’ club’ in its pacing and style, and if that’s you, you may have concerns (especially as the audio version comes in at 4 discs and around four hours in length). Fear not. Listening to this gave me the opportunity to use my imagination and replay in my mind what I had first seen nearly 40 years ago, and it all made sense. And this time, every chapter was spectacular. Bex Ferriday