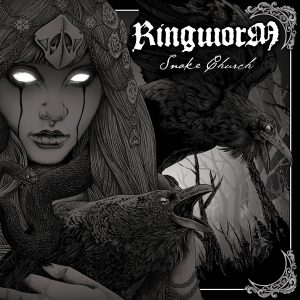 Since Ringworm began as a straight up Cleveland hardcore/metal band with their first release, The Promise, in 1993, they’ve continually pushed extreme and heavy music to its limits and this new offering is no different.

Their eighth studio release on Relapse Records, Snake Church, ensures that their twenty five year continues to evolve and this new release takes their fans, and those new to, Ringworm down a dark and pleasant trip to the bowels of hell while building the foundations laid down by some of their other classic recordings such as Justice Replaced By Revenge, and their last record Hammer of the Witch.

The artwork, drawn by Human Furnace, is a strikingly dark and exquisite masterpiece which represents all that the band is and the totality of their lyrical content.

Snake Church takes you to hell and back, as the whole album is relentless and doesn’t let up with it’s breakneck tempo or bludgeoning, raw vocals. It blasts through an awesome twelve tracks lasting thirty-two minutes, that begins with the opening track Snake Church and right through to the darkened, slow sludge of Shades of Blue.

Other tracks that stand out on this cleanly produced recording are Innocent Blood, and the viciously evil and demonic track The Razor and the Knife. If you’re a fan of bands such as Hatebreed, Integrity or Slayer you will definitely get everything that you want, and need, from this record and much more. Be sure to catch them live if you get the chance. Heath Crosby