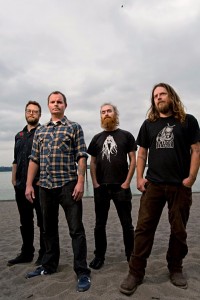 Portland’s RED FANG has premiered a cover of Elvis’s “Can’t Help Falling in Love” in preparation for the band’s headlining fall US tour! The song can be streamed via Loudwire HERE.

The band said about the song,
“We were asked to cover an Elvis song a while back and none of us are really Elvis fans so we were kind of at a loss. We had this dark and doomy jam we’d been kickin’ around for a while and we thought ‘what if we just record our own song and see if we can make the lyrics fit somehow?’ And to our surprise it turned out pretty rad! Maybe Elvis is spinning in his grave, but I dig it.”

RED FANG‘s Revolver Magazine-sponsored tour comes on the heels of the band’s recent European and Australian tours, and includes appearances at Slipknot’s Knotfest and Monster Energy’s Aftershock Festivals. Support will come from noise rockers Whores and stoner rock/metal up-and-comers Wild Throne. This headlining tour marks the last shows RED FANG will perform in 2015. Early next year, the band will head into the studio to begin recording its new full-length. A complete listing of dates is available below.

RED FANG’s most recent album Whales and Leeches (released via Relapse last year) debuted at #66 on the Billboard Album Chart, marking the group’s highest sales week ever and first debut in the Top 200. Whales and Leeches, produced by Chris Funk (Decemberists) and mixed by Vance Powell (White Stripes, Raconteurs, Kings of Leon), has generated worldwide critical acclaim for the band from publications such as SPIN, Revolver, Magnet, Alternative Press and many more. Featuring such guests as Mike Scheidt (Yob) and Pall Jenkins (The Black Heart Procession), Whales and Leeches has propelled RED FANG into the upper stratosphere of the heavy rock and metal elite. Stream the album in full via the band’s official Bandcamp page HERE.

RED FANG recently premiered a new animated video for “Crows In Swine,” the third single off Whales and Leeches. The clip (animated and directed by Adam Avilla) can be viewed HERE.