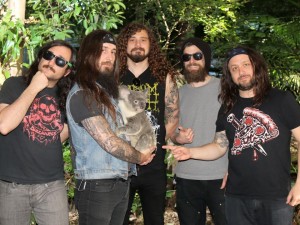 Richmond, VA thrashers IRON REAGAN have premiered a new music video for the song “Rat Shit” off the band’s 2014 full-length The Tyranny of Will! The video is premiering as part of Vevo’s Metal Monday series and can be viewed HERE.

IRON REAGAN‘s new video arrives just in time for its mammoth tour plans, which will see the band on the road for a whopping three out of the next four months across the US, Canada, and Europe. IRON REAGAN will be playing both legs of the Indie Merch Store-sponsored Indie Merch tour in North America, which also features The Black Dahlia Murder alongside a veritable who’s-who of up-and-coming metal acts including fellow Relapse grinders MARUTA. The band will then embark on the Persistence Tour in Europe this January alongside Ignite, Terror, and several others. A list of dates for the Persistence Tour is available below.

IRON REAGAN is still touring in support of its most recent full-length The Tyranny of Will, released last year via Relapse. The Tyranny of Will found widespread critical acclaim from publications worldwide, including from Decibel, Pitchfork, Revolver and many more. The album is available for streaming and digital download via Bandcamp HERE and for physical purchase via Relapse HERE.