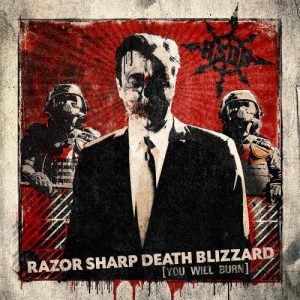 With a name like Razor Sharp Death Blizzard you’d expect that these chaps would bring a musical wall of pent up rage and aggression in a full force, kicking, screaming orgy of non-stop pounding violent Hardcore mayhem. And you know what? That’s exactly what they do, clawing their way into your soul, tearing at your will until, unable to resist, you give in and let them subsume you in their magnificent maelstrom of Hardcore destruction. Just before I surrendered my psyche to RSDB, I had a vision of Stampin’ Ground collectively fried on crystal meth driving a steamroller over the twitching, screaming, bleeding bodies of Earth Crisis, and realised that my “hallucination” was sound made real, the Universe’s way of letting me see the true face of Razor Sharp Death Blizzard before I became just another of their playthings. Give in and embrace the rapture that is RSDB… Tim Cundle