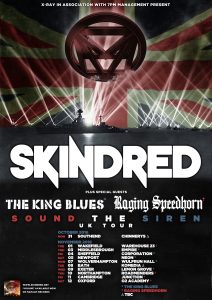 Corby sextet Raging Speedhorn have released a video for new single “Bring Out Your Dead” ahead of their upcoming run with Skindred!

The track, which received its debut on Dan Carter’s BBC Radio 1 Rock Show recently, was filmed during the band’s appearance at Download Festival earlier this year.

Guitarist Jim Palmer had this to say of the upcoming tour with Skindred:

“We’ve known those guys for years, Benji longer because of Dub War. We are really happy to be able to go out and play these shows with them, it’s going to be so much fun. Skindred have grown into such an incredible band so it’s an honour to be asked to do this. It’ll be like stepping right back to those days in the early 2000’s when we last shared a stage. Bring on the party!”

Raging Speedhorn will appear on the following dates with Skindred: